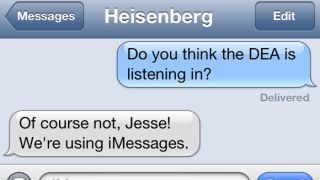 So that's how they've been doing it

Apple has joined Facebook and Microsoft in revealing the number of data requests it received from the government between December 2012 and May 2013, following the NSA Prism scandal.

Apple claims that these requests included "both criminal investigations and national security matters", with examples including robbery investigations or searches for missing persons.

Apple also added that all iMessage and FaceTime conversations are protected by encryption at both ends and are completely impossible to intercept – even by Apple.

"Apple cannot decrypt that data. Similarly, we do not store data related to customers' location, May searches or Siri requests in any identifiable form," it said.

As the statement claims, Apple had not even heard of Prism until the story broke on June 6, which saw the company, alongside the likes of Google, Facebook and Microsoft, accused of giving the NSA access to users' private information.

Apple was able to disclose the details after getting permission from the US government to report on requests related to national security.

Facebook and Microsoft also laid out the number of requests they had received for user data, and while the numbers were a bit higher than Apple's, both companies had a similar story to tell. However, all companies seem determined to keep pushing for greater transparency.