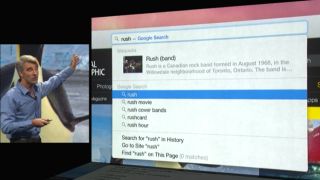 This Safari just got better

Apple shown a spotlight on Safari during WWDC 2014, outing a new look and new features for the internet client. All in all, Safari is faster and more elegant than previous iterations.

The changes come packaged within OS X Yosemite, the newest version of Apple's Mac OS that's due this fall.

Immediately noticeable is Safari's updated UI which features a flatter look that brings it up to speed with Apple's design language.

Apple has done away with Safari's favorites bar, but it's cleverly re-purposed it elsewhere. Now when users go to search, a list of their favorite sites appears. The effect clutters the browser while still keeping frequently visited sites accessible.

There's also an improved share button that pulls up a new recent recipients list. Find an image you want to send to a friend, for example, and find that person's email in the list below.

Safari features a new and improved Spotlight search feature that pulls information from sources like Google and Wikipedia. RSS feeds are swept to the sidebar, and tabs are kept in a bird's eye view that users can move sideways to select.

New privacy tabs can live alongside regular tabs but won't track your activity, and a new Bing extension makes for quick inline translating.