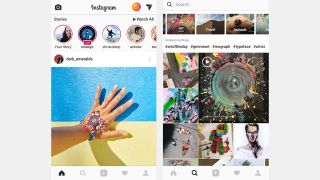 Instagram had its users in a muddle over the holiday week as it accidentally rolled out a huge change to the mechanics of its photo feed – a change that meant users had to tap on images to advance through the feed, rather than using the traditional scrolling method.

In other words, you could browse the photo feed in the same way you browse Instagram Stories, by tapping to progress, and with new items shuffling in horizontally. Instagram says the experiment shouldn't have appeared for all users, and the update was quickly rolled back within an hour after attracting a whole lot of anger online.

If you want to see some of the disgruntled takes on this potential change to the feed, take a look at #InstagramUpdate on Twitter. Based on those responses we'd say it's going to be a long time before Instagram thinks about applying this tweak again.

NO I JUST TURNED OFF UPDATES HOW COULD YOU DO THIS TO ME @INSTAGRAM I HOPE YOUR SHARES DIE IN A FIRE pic.twitter.com/4t90fXUxyxDecember 27, 2018

Instagram boss Adam Mosseri was quick to downplay the slip on Twitter, saying that the experiment should only have appeared for a very small group of users. If you're still seeing the horizontal feed in the app, try restarting it, Mosseri says.

It's not clear what benefits Instagram thinks this "new way to move through posts" might bring for users, but if you're a fan of the new style you might be out of luck – there's no indication this is going to be available again in the near future.