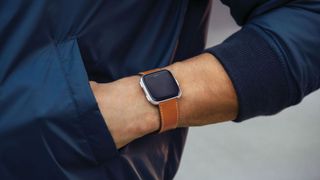 Faster, better, and the future of mobile internet, 5G is certainly the connection you want on your smartphone. It means faster speeds for when you want to download something in a hurry, as well as being able to stream video more efficiently while sitting on the train during your daily commute.

With speeds potentially being 100 times faster than standard 4G, the new norm is going to be spectacularly speedy (providing you live in an area that supports 5G).

What does that mean for your smartwatch or fitness wearable though? It's not as though you'll find yourself often downloading hefty files to your watch or fitness tracker, after all. So, will 5G really make a significant difference to smartwatch users?

With a growing trend for wearables to be self-sufficient rather than relying on smartphone connectivity, there's huge potential for growth here, but not necessarily in the same way that you'll see with your smartphone. The importance of 5G to wearables is a little more complicated than simply being faster.

What we do know so far is that the way we use our beloved wearables could be set to change rapidly over the coming years.

So we all know that the best thing about 5G is its huge speed advantage over 4G, but there's more to it than that. 5G is smarter. It offers lower latency so its response times are speedier.

For a phone, that might mean a faster-loading webpage due to a lower ping, but for a smartwatch that means exchanging data faster so, for instance, you won't have to wait for map updates or your step counter to sync up.

In theory, it'll all just work automatically rather than leaving you to stand around waiting for your data to sync with relevant accounts.

5G can also handle more users simultaneously than 4G because it can co-exist alongside other wireless signals without any risk of interference, as it operates on three different spectrum bands.

For a smartphone, that means it can operate at a high enough speed to stream the latest Netflix hit uninterrupted – but the next-gen mobile network will also improve our wearables, too.

Theories suggest that 5G devices could have two different modes available to them - a high-speed and high-bandwidth mode for streaming and downloading, and a low-power, long-life mode for a better battery life and improved reliability. While few smartphone users will be interested in the latter, a long and reliable battery life lends itself perfectly to smartwatches and wearables.

Through 5G, it's possible to have thousands of wearables connected within a small geographical area without disruption. Something that will be immediately appealing to those who live in busy cities that can have congested airwaves.

The cloud just got bigger

With the rise of 5G, all devices may no longer need substantial physical storage to be built into them. With faster connections, lower latency and effectively instantaneous transmissions, users could simply store all their apps and files on the cloud rather than requiring their smartphone or wearable device to include physical storage.

That has a few benefits tied into it. By turning your smartwatch or fitness wearable into a gateway for your data, it means that they can also become smaller.

Instead of having chunky devices that contain lots of physical storage, manufacturers could focus on providing more advanced sensors and better batteries. Wearables could also simply look smaller, sleeker and more fashionable – something that's particularly relevant in the case of ring or necklace based trackers.

Most wearables are able to track how far you've run, your current heart rate, and your location, but all of these features are typically somewhat inaccurate at times.

With more nano sensors built into them, we could benefit from sleek-looking wearables that are also highly accurate, right down to being able to measure body temperature or other vital signs. For the avid runner, this could mean no longer needing a heart monitor strap as well as a smartwatch, for example.

The idea of wearables that work as your own personal trainer or doctor is far more likely with 5G too, especially if it frees up storage space and makes data they capture more accurate.

Smarter use of smaller technology

More space for a better battery, in conjunction with 5G's more efficient use of power, could also go some way to reducing the smartwatch's biggest obstacle up until this point – its limited battery life.

Smaller wearables in the future may also lead to a growth in smart clothing. Smart clothing already exists, but it's limited in scope and popularity currently.

5G and the implementation of wearable antennas within the material of clothing could be exactly what's needed to boost the popularity of smart clothing. It might sound like science fiction right now but a recent paper has suggested that 5G antennas could be manufactured from conductive threads and adhesives.

What's next for smartwatches, fitness trackers and 5G?

Smartwatches and fitness trackers have come a long way in a short space of time. It wasn't that long ago that smartwatches relied on users to also have their smartphone with them at all times.

Now, you can easily spend the day with just your smartwatch on your wrist and you won't miss out on key features like making contactless payments or tracking your exercise. That's important if manufacturers want wearables to continue to be popular.

Right now, smartphones are seen as an essential part of daily life, but wearables and smartwatches are usually just a welcome 'bonus' to those that can afford them. 5G has the potential to change all that.

If 5G technology is able to reduce the size of wearables, while enhancing the battery life, that could be exactly what's needed to convince the general public that they need smart technology on their fingers, wrists, or neck.

Therefore, 5G has the potential to change how we consume wearable technology massively – simply put, it'll be fascinating to see what the first few 5G wearables offer.