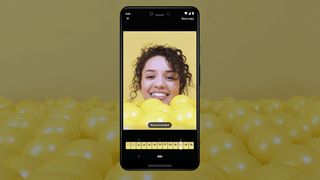 Mere hours after we were first officially introduced to the Google Pixel 3 and Pixel 3 XL, a Google representative has confirmed that the company originally wanted to include a notch on the smaller phone but it couldn't for the final release.

Speaking to Android Central's Daniel Bader, a Google representative confirmed that if the company had been able to put a notch in the smaller phone there would have been one. The representative revealed that Google couldn't fit it in.

Google told me that if they’d been able to put a notch in the smaller Pixel 3 they would have and only didn’t because they didn’t have room for the cameras and the speaker in the narrower hardware. So it’s pretty safe to say this is the last year of notchless Pixels.October 9, 2018

Both the Google Pixel 3 and Google Pixel 3 XL feature a dual sensor front-facing camera as well as all the other tech at the top edge of the phones, but only the Pixel 3 XL is wide enough to have enough room to sport a notch in the middle.

Some will be excited by the lack of a notch on the Google Pixel 3, but as Bader notes, Google's intent to include one on the smaller phone at some stage likely means future phones from the company will all have a notch.

Bader also notes how the company's main focus was to include a bigger screen, and in 2018 the main way for manufacturers to do this is by including a notch in the middle of the top edge of the screen.

All of that said, the Pixel 3 features a 5.5-inch screen that's a touch bigger than the 5-inch display on the Pixel 2, so even though you won't get a notch if you opt for the smaller device you'll still get more screen than last year's phone.