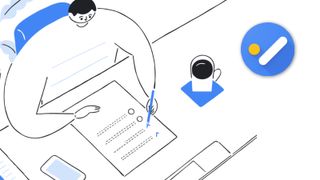 Helping you keep tabs on your to-do list is a code that, despite a smartphone’s endless utility, hasn’t really been cracked yet. But Google’s new Tasks app (available on Android and iOS) is the latest to try and solve the problem. How? By more intuitively tapping into Gmail, which has just launched its fancy redesign.

If you’re one of the lucky ones with access to Google’s new Gmail web app, you’ll notice that there’s a Tasks section that you can drag messages into. Whenever you move a task, a to-do item is created in your task list with all the pertinent information attached, similar to how Google Now can alert you to an upcoming flight complete with boarding details.

Of course, you can also just use the new Google Tasks app to start a list without looping in details from Gmail, but as this sort of functionality has long be desired by many, it seems unwise to ignore it.

As avid users of Google Keep, another app that tracks to-dos, Tasks seems like a promising replacement. We like the fact that Keep offers a widget that we can plant on an Android phone’s home screen, but look forward to Tasks’ greater level of automation.

There’s more work to be done, it seems, as Tasks doesn’t appear to have key features that we like in Keep, like setting color priorities, or ones found in other task management apps, like categories.

Interestingly, the Tasks icon closely resembles that of Wear OS, Google’s rebranding of Android Wear. It’s likely that we’ll see more and more apps continue to riff on this similar look – maybe the next will be YouTube Remix?