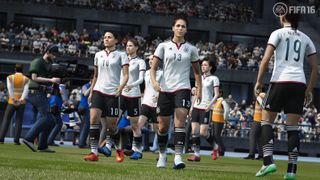 For the first time ever you're actually going to get the chance to play as one of the top twelve Women's National Teams in FIFA 16.

When the footie franchise launches its latest game in mid-September you'll have the opportunity to play as either the Women's National Teams of Australia, Brazil, Canada, China, England, France, Germany, Italy, Mexico, Spain, Sweden, and the United States of America.

EA Sports drafted in four of the top players from the US National Team to build new player models as well as the motion-captured locomotion.

"We're making sure fans get an authentic experience when playing with Women's National Teams," explained David Rutter VP and GM of EA Sports FIFA. "Thanks to our innovative player capture and reference tools, as well as the sophisticated gameplay platform which we will continue to innovate on in FIFA 16."

The developers also took full head-scanning gear around to various events around the world in order to capture the physical likenesses of all the top players from the Women's National Teams.

"It is such an honor for women's players and our team to be included in FIFA 16," said Alex Morgan of the US Team. "I always wondered what it would be like to see our team in the game and it is very cool to know that it is now a reality."

It's incredibly refreshing to see such a massive, male-dominated franchise getting this update, reflecting the growing interest in the Women's game. Fingers crossed it will only encourage more interest and participation.

And with the Women's World Cup starting in just over a week (being shown around the world in 8K, no less) the timing of the announcement is pretty good too.

If only all the recent FIFA news was so positive...