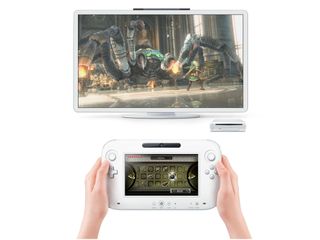 Wii U dev kits make their way into the wild, with first impressions looking good amongst EA Sports developers

EA developers have confirmed that the forthcoming Wii U console from Nintendo is easily as powerful as the Sony PS3 or the Microsoft Xbox 360.

EA Sports' vice president Andrew Wilson confirmed that his team now have the latest dev kits from Nintendo and that the tech can do anything that PS3 or 360 can do.

Happy with the new box

Wilson told Eurogamer that, "as every new piece of hardware and every new development library comes through we get a greater understanding of the power. With our early research we had been very happy with the output of the box and we expect that that will only go up moving forward.

"There are added challenges for us as developers when you think about rendering on two screens and what that might mean, but we're looking forward to that challenge.

"I think we'll be able to do anything that we can do on PlayStation 3 and Xbox 360 on the Wii U. That's our hope…but again we're still in the early stages."

Eurogamer also (unofficially) pegs the Wii U release date as August 2012, as that is the date that EA's launch title Darksiders II is currently confirmed for. Clearly though, it is still early days, and these launch plans could well change considerably over the next year or more.

Wilson also said that there was an "openness and willingness" at Nintendo to work closely with EA and other third party developers and game publishers, adding that online gaming in particular was "something that we're working very closely with Nintendo on".

He explained, "We are highlighting to them what we believe are the most important elements to that infrastructure to deliver a connected experience that we think is the future of gaming."

EA's accolades come as Nintendo announces disappointing financial results; no doubt all concerned are hoping that the Wii U will turn it the company's fortunes around.