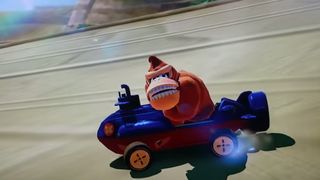 The face that enraged a thousand karters

Is it just us or does it feel like E3 is lacking some serious hype this year? A few games that would have garnered a lot of fanfare - Forza Horizon 2, Far Cry 4, Mortal Combat X, Halo 5 - have fired early, leaving us to wonder what's actually left to be revealed in LA next week. Let's hope that there are still a few surprises in store.

After all, with much of last year's event dedicated to showcasing the PS4 and Xbox One, this year should be very much focused on what we're all really there for: the games.

Sony has announced the full lineup of titles that will be on display at its E3 stand. But fear not, we're promised that there will be some surprises left for the main event. What might they entail? Hopefully a glimpse at Media Molecule's Project Morpheus title, for one.

A concerning report from IGN this week claimed that work on The Last Guardian had been cancelled. But Sony's Scott Rohde soon took to Twitter to dismiss the idea. Aaaand breathe.

Microsoft will undoubtedly go big on Halo 5: Guardians and Fable Legends. But we'd like a sneaky teaser at the next Gears of War or - even better - something totally new. But it's the attention to Kinect (or lack of) that we're most interested in. Will Microsoft push its motion peripheral even harder now that gamers have the option of buying an Xbox One without it?

EA has also revealed its 2014 lineup. Battlefield Hardline, The Sims 4, FIFA 15, Dragon Age: Inquisition, Spots UFC and NHL 15 will all be on stage and playable on the show floor. But forget all of that - it's the new Star Wars Battlefield that we're most excited about, and we fully expect to see some lovely new footage. Expect a look at the Mirror's Edge reboot too.

And we don't think it'd be too much to ask for a Mass Effect teaser to finish on, do you?

For the second year running, Nintendo will eschew the dog and pony show in favour of an online Nintendo Direct presentation. This week a list pertaining to be Nintendo's E3 lineup surfaced, though we're not entirely convinced.

Most of it looks believable enough but The Legend of Zelda: Unbound King… hmm, we're not so sure about that name. However we'll keep an open mind. It's really hard not to when you have the promise of Super Mario Sunshine HD on there too.

Things we learned in Mario Kart 8 this week

Like many of you, we've been going hard at Mario Kart 8 for the past week. You know it's got to a dangerous point when you get in a real car and start yelling about the distance between item boxes. Here are our key Mario Kart learnings so far.

Valve may have delayed the Steam Machines until 2015 but Asus is wasting no time in pledging support to the cause. This week it unveiled two gaming PC boxes that will be available in Steam Machine form next year.

We particularly like the look of the GR8, which, with its 2.5 litter box, is a seriously compact beast. Expect it to ship with Windows 8.1 later this year, and as Steam Machine in 2015.