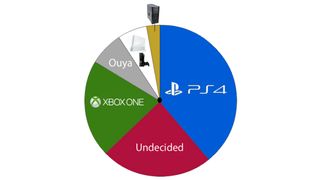 To say it's been a big week for gaming would be an understatement. As if we weren't still getting over the excitement of E3, Microsoft pulled one of the most significant U-turns we've ever seen.

But now that we've had some time to recover, we thought it would be fun to ask an office of tech journalists from TechRadar, T3 and Gizmodo what console they're most inclined to buy in the near future.

We found that the PS4 came out on top with 36 per cent, but the Xbox One wasn't far behind at 20 per cent - with some of the voters admitting they had turned in favour of Microsoft after its DRM reversal.

Even Ouya gets a look in

24 per cent remained undecided though, most of them saying that they were either waiting for everything to blow over before they made an informed decision, or weren't yet enticed enough yet to care.

Interestingly, Ouya got eight per cent, while another eight per cent said that they were actually gravitating to the current gen offerings after E3.

Oh, and there was one vote for a 'Super Mega Gaming PC' to overshadow all other consoles. Which we think is fair enough.

So there you go. That's what we're feeling right now. But we're still a while off the PS4 and Xbox One releases - plenty of time to change our minds.