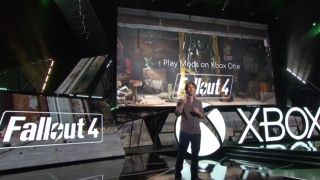 Update: You'll be able to share and transfer Fallout 4 mods on the Xbox One that were created on the PC all for free. All copies of Fallout 4 will also ship with Fallout 3 for the console. Thanks Microsoft!

Todd Howard, Game Director of Fallout 4, has confirmed on E3 Live that the creation mods suite will also be available on PS4, but will release at a later date, after it comes to Xbox One and PC.

It's happening folks, Fallout 4 has a release date. November 10, 2015 is when you can expect to start tearing post-apocalyptic Boston a new one - and yes that's where the game will officially be set.

During Bethesda's first E3 2015 conference, we were shown the world before the Fallout we know and love.

The bombs fall and you emerge 200 years later as the sole survivor of Vault 111. But before this, official gameplay let us see that on a "beautiful Saturday morning," you start the game off by creating your face and hanging out with your little family.

Both men and women can be created and whichever you leave on the front of your screen will determine your gender the rest of the game.

Apparently the game is so dynamic, your offspring will even look like you and your spouse after the character customization process. The devs even recorded 1,000 of the most popular names so characters in game will say it.

"Player freedom remains our a absolute number one goal," Fallout Game Director Todd Howard states. Your dialogue choices can be done in first or third person.

Dynamic volumetric lighting was used to create the world on the latest Creation Engine meaning the ugly wasteland will probably be gorgeous.

Craft to your heart's desire

You can tell your new furry companion to do things by pointing anywhere in the world and it will be able to follow it based on the contextual commands. Picking up items, attacking enemies and activating switches are some the actions Bethesda showed off.

Love The Sims? Well, think of the wasteland as your new real estate.

The devs want the world to be "a place you want to live in" meaning you'll be able to build homes, plant food, create generators through switches by running wires and people will start arriving at your little post-apocalyptic shanty town. Defenses can also be built because raiders will attack and Brahmin caravans can even be run back and forth from town to town.

There are 50 base weapons, 700 weapon modifications with each being craftable as well. Add armor, chemicals and food to the mix and Fallout 4 is basically Skyrim on mega steroids.

Fallout 4 will be playable on PS4, Xbox One and PC this fall.