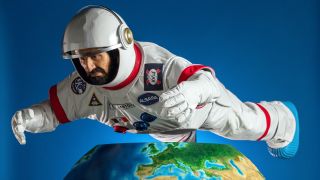 Footballer Eric Cantona is planning to take a trip into space (perhaps), and has announced it in the only logical way: by unveiling a life-sized levitating statue of himself at London Victoria railway station, England.

The monument (puzzlingly described as the world's 'first levitating statue of Eric Cantona’, implying that others will follow) uses magnets to hold the spacesuit-clad sculpture above a model of the Earth. Such floating sculptures aren't unusual in modern art galleries, but this might be the largest to date.

So why, you might ask, would Cantona blast off in the first place? To promote beer, of course. His trip is part of a (tenuous) promotion with beer brand Kronenbourg, to prove that its lager “is ‘le taste supreme’ in the entire universe”.

It seems unlikely that Cantona is actually planning to enter orbit. In a mock press conference, the footballer announced his intentions (complete with Gallic shrug) in front of a parody NASA sign reading 'ALSASA' – a reference to the Alsace region of France, from which the brewery obtains some of its hops.

The idea isn't entirely beyond belief, though – both Elon Musk's SpaceX and Richard Branson's Virgin Galactic plan to take tourists into space in the near future, and Jeff Bezos' Blue Origin is preparing for manned flights to the moon.

Whether it's true or not, the statue is still an impressive piece of work. Artists and engineers spent hundreds of hours crafting the model and ensuring it floats gracefully above the globe.

Cantona isn’t the first footballer to be immortalized at a public transport hub, but his statue levitates head and shoulders above the much-mocked bronze of Cristiano Ronaldo installed at Madeira Airport last year.