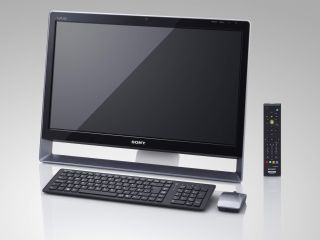 Sony has announced the Vaio L series all-in-one PC, bringing Blu-ray and a 24-inch touchscreen to take advantage of Windows 7.

The Vaio L Series – which has a UK release date of 22 October, the same day as Microsoft's Windows 7 – is the first touchscreen Vaio all-in-one.

"The highlight of the Vaio L Series is the big, beautiful 24-inch widescreen X-black LCD with Multiple Lamp Technology for a crystal-clear view of your photos, camcorder clips, movies on Blu-ray Disc and more, all in full HD," says Sony's release.

"In a first for Vaio, the stunning display is also an ultra-high resolution touchscreen that takes full advantage of the new features in Windows 7.

"It's never been more easy – or more fun – to explore and navigate through documents and applications with simple gestures… and no mouse or keyboard needed."

Drilling down into the actual specs, there are two flavours of the L-series: the Sony Vaio VPC-L11M1E/S and the more powerful Vaio VPC-L11S1E/S.

We're still waiting for confirmation of UK price for both of the Sony Vaio L-series PCs, but expect it to make a sizeable dent in your wallet.