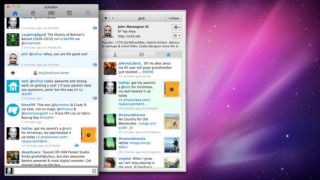 Naan Studio has announced that it will soon close up shop for Echofon, the desktop version of its popular Twitter client.

Echofon rose in popularity thanks in large part to its ability to sync between its desktop and mobile apps, along with features like support for multiple accounts and a Details Window that allowed users to more easily view entire conversations, complete with user details.

The desktop Twitter client will continue to work "in the immediate future" for those who already have it installed, but expect download links to be removed by the end of the month and no further support updates.

Without desktops to worry about, Naan Studio will focus its efforts on the mobile Echofon app available for iPhone and iPad.

"We do thank you for using Echofon and while we are sorry we won't be able to continue providing a great Twitter experience on your desktop, we are committed to providing our users with an even better mobile experience," Naan Studio wrote in a blog post.

Earlier this year, TechRadar rated the Echofon desktop app as No. 3 on a list of the 22 best Twitter clients.

It's compatible with Mac OS X, Windows and also available as a Firefox extension both in a free ad-supported version and an ad-free update for $9.99 (UK£6, AU$9.73).

Without Echofon on desktop, at the end of the month UberMedia will no longer have a desktop Twitter client to its name, though it own two mobile Twitter apps.

No reason was given for ditching the desktop client, leaving Echofon's fans with more questions than answers as they search for a new Twitter app.