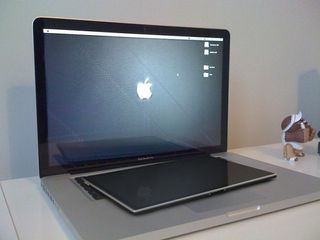 New supposed spy pictures have landed on the internet, a day before the real release of the Apple Tablet.

Originally posted on Twitter and picked up by myriad tech news sources, the images certainly look real which more than likely means that they are completely fake.

What is shown, however, is an ultra-thin tablet-like device nestled upon a MacBook Pro.

The person who 'outed' the images is Dustin Curtis, a user interface designer who says a friend sent him images of Apple's new game-changing product.

We're guessing the 'friend' is no stranger to Photoshop.

At least there's another lead into what is becoming the Escher's Staircase of the technology world – a report which states a metrics firm, Flurry, has detected what could well be the Apple Tablet's software signature through the applications which are running on it.

A Flurry executive, Peter Farago, Vice President for Marketing, spoke to the New York Times, saying that around 50 new devices running apps have been detected and all of these were within the Cupertino campuses of Apple.

The apps in question included news, books, streaming and social media, with "a heavy emphasis on what people can do during those in-between moments and while in transit."

There's also a gaming slant, with Farago saying: "we are also seeing so many social apps, like multiplayer games you can play with your friends."

There's only a day to wait people, then we will see if the world is really ready for a Tablet/iSlate/iPad revolution.

Via TechCrunch and The Big Money