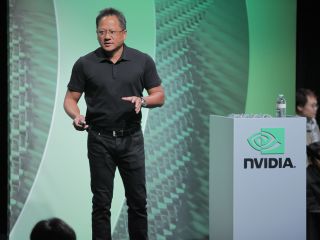 At a press conference this morning, filled with Jen-Hsun Huang's usual hyperbole, Nvidia finally announced its long-awaited entry into the CPU game.

With both AMD and Intel having greater or lesser share of the GPU/CPU market there has been much speculation over the last few years as to when Nvidia was going to announce it's first proper CPU. With licensing limitations put on its ability to produce an x86 CPU it has come from a partnership with mobile darlings ARM.

But this is no mobile part, oh no, the impressive dual-core Tegra 2 chip has got Nvidia bounding into that market, this is going to be a serious, high-performance part aimed at personal computers.

Like AMD's Fusion before it Project Denver is going to be integrated onto the same chip as its GPUs.

"With Project Denver, we are designing a high-performing ARM CPU core in combination with our massively parallel GPU cores to create a new class of processor," says Huang.

It wasn't until the end of his performance that Jen-Hsun announced this new chip and he began by talking about the pervasiveness of the ARM platform amongst developers.

"Because of the pervasiveness and the openness of ARM and because there are so many content developers around the world who are now focused on this mobile computing revolution, the energy around the ARM architecture is absolutely enormous."

"The fact of the matter is if you're a software developer and you're not working on ARM, you've got your head in the sand somewhere," he continued.

Jen-Hsun went on to mention that he was going to have to wrap up the press conference to go to the Microsoft event, and casually threw up a slide on the projector from Bloomberg Newsweek saying that Microsoft was announcing future Windows support for ARM chips.

"I found this on the web, so it's all fair game," said Huang.

With such a backing from major software developers the entry of a high-performance ARM CPU could be rather interesting to say the least.

It's not going to be an instant thing, and Intel is certainly not quaking in its boots, but Nvidia finally has the missing piece to the jigsaw that could see it growing from strength to strength in the coming years.

It's just as question of how long till we see actual silicon...