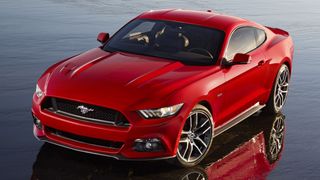 Fortunately, our model will have the steering wheel on the other side...

Capitalising on the buzz for the 2015 Mustang, Ford Australia has established a dedicated website that enables dealerships to take pre-orders for the muscle car's big arrival.

Despite the fact that Australian pricing is yet to be set, Ford claims to have received 1,200 pre-orders and 600 deposits from those eager to secure their next set of wheels – and perhaps perfect their Steve McQueen impersonation.

The site is designed to help dealerships identify serious buyers, while enabling Ford Australia to forecast demand. It also enables customers to specify preferences, choosing their transmission and engine type, whether they want a coupe or convertible body, and their new pride and joy's colour.

A horse of a different colour

Ford claims it established the site after receiving 15,000 "expressions of interest" from Australian drivers keen to learn more about the latest incarnation of the iconic pony car.

The new Mustang will be the first to roll out of the factory with right-hand-drive construction – Mustangs previously spotted on Australian roads would have had to go through a pricey conversion process.

As previously reported, the Australia Ford Mustang will match the power of its US counterpart despite an apparent difference in their specs on paper.