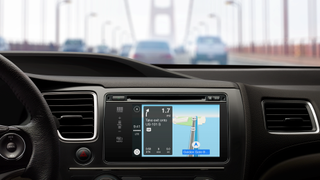 Google could make its own play for drivers' eyes

Google is about to catch a ride in your car with a new dashboard OS tentatively called Google Auto Link, according to one report.

Google Auto Link is reportedly "projected" from Android smartphones, not "embedded" in cars themselves, so users will control their phones from their dashboards.

Like CarPlay, the Google system will likely let users play music, answer calls, navigate, and do more without needing to take their eyes from the road for too long.

Google Auto Link, which may ultimately emerge with a different name, is no doubt a product of Google's Open Automotive Alliance, announced earlier this year.

The alliance includes Audi, General Motors, Honda., Hyundai, and even Nvidia, which is making chips for in-car systems.

Audi has already begun embedding Google Earth in its vehicles, and some Hyundai cars let users search for destinations with voice commands, but Android has yet to be fully integrated with any cars.

Google said previously, though, that it wants to get Android into cars in 2014, and that it's "developing new Android platform features that will enable the car itself to become a connected Android device."

Watch out for more news about Google's in-car efforts as IO approaches in the next week.