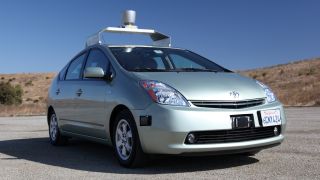 What do you do when no one is jumping to join you on a whacked-out journey? Go it alone, of course.

That appears to be the case with Google and its self-driving cars, as Amir Efrati reported over at Jessica Lessin's blog that Google is designing and developing its very own, bumper-to-tailpipe automobile.

People familiar with the matter said Google's been chatting up contract manufacturers about building a vehicle using its specifications. The go-around reportedly comes as major car makers still haven't teamed up with Mountain View to incorporate the company's self-driving tech in their products.

If showing up to a Google dealership and leaving the lot with a Model G self-driver sounds appealing, Google apparently has one more for you: According to Efrati, the company's considered a sort of "robo-taxi" service that would have autonomous cars driving around, picking up passengers on demand.

It's unclear if Google would run the service or run it through another company. While a human would need to sit behind the wheel in case of emergencies to start, Google is said to be looking into how it can bring the auto-taxi concept to the masses.

As we reported yesterday, Google is said to be in talks with auto parts maker Continental AG. Efrati's sources backed up this assertion, also noting that Google has spoken with Magna International, a major car component supplier.

Despite these powwows, Google still seems to be teetering on whether it will pursue a partnership to build a car based on its own design. One of Efrati's sources said Google hasn't given up on hooking up its self-driving tech in a big car brand's auto, so all avenues seem open at this point.

And really, at the end of the day, Google may merely want to keep self-driving tech at the forefront of car makers' craniums. Indeed, someone with knowledge of Google's efforts noted the company aims to pressure major car brands into developing autonomous-navigation tech, even if that means not teamin with Google.

With the Frankfurt Motor Show due up in early September, we could have a lot coming from Google that's radically different an OS update or new piece of hardware. To be honest, the prospect's a little exhilarating.