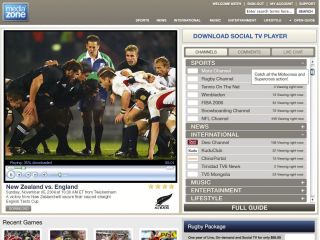 With the internet fast becoming the new platform for distributing and watching TV, US-based MediaZone is taking advantage of this with Social TV - broadcasting local content worldwide.

Geared around social networking, Social TV allows users to discuss the shows they watch with fellow fans. The service also allows content producers to create their own channels which Social TV users can subscribe to.

The main appeal will be the diverse content available on the service. MediaZone is courting distribution deals with channels from all over the world.

"We believe that providing viewers an interactive, social experience while reshaping the economics of launching and distributing broadband television channels globally represents the next wave in online video." said Michelle Wu, CEO of MediaZone.

According to Wu, there are several content providers looking to create channels with unique material for Social TV. Such an approach "creates cross-promotional opportunities with conventional TV".

While US TV production companies make moves to bring their multi-million dollar shows online, MediaZone appears to taking a more diverse, cultural route. Among the channels and shows to be made available on Social TV, are...

MediaZone will be expanding its content over the coming months, including more from the UK. The company already broadcasts major sporting events across the net via third party subscription; including Wimbledon and rugby tournaments.

To download the beta version of Social TV, visit the website . For now, the site only runs on Windows Explorer, although MediaZone is working on making it compatible with other browsers.