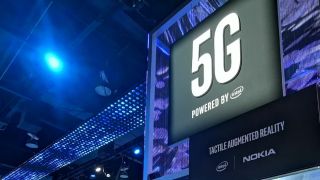 Download a 4K movie in three seconds! That’s the headline feature of 5G according to the lazy mainstream media, which is probably why the public aren’t yet as excited about 5G as they should be.

So 5G isn’t about downloading movies quickly? No, though the focus on 5G’s incredible speeds is no surprise. After all, 5G networks will bring speeds of about 1gbps.

Compare that to the 4G LTE networks we have in the UK right now that offer real-world speeds of about 20mbps; 5G will be 100 times faster, and in the long-term it’s expected to jump to up to 20gbps.

However, this is just the eMBB (enhanced Mobile Broadband) feature of 5G, which is only a small part of the story.

To understand 5G, you need to know that 5G networks will be able to support up to a million devices per square kilometer thanks to massive Machine Type Communications (mMTC) and that they’ll also have Ultra-Reliable and Low Latency Communications (URLLC).

Jargon? Yes, but by being super-fast, super-dense and enabling real-time, latency-free communication, 5G will bring changes to the tech world we can only imagine. Luckily, we can imagine quite a lot already… besides, who still downloads movies?

Probably the most misunderstood aspect of 5G is that it’s only for smartphones and mobile gadgets.

Think of it as wireless fibre, with speeds that are almost as fast or, at least, fast enough for anything you might want to do online at home. In fact, some 5G trials in the US have concentrated almost solely on 5G-powered modems for homes; you place one in a window with a line-of-sight to a 5G mast, and with the help of a router it spreads ultra-fast 1gbps WiFi around your home.

That being said, you shouldn't overlook the 5G-powered revolution coming to mobile video. 4G has made watching TV and YouTube on a smartphone possible, but let’s be honest, it’s often not much fun at all. Web pages that take an age to load, constantly buffering video, apps that freeze and photo uploads to Instagram that stall and splutter…4G can be a real headache.

So 5G will likely bring an instant and more reliable internet. That’s the theory, anyway. However, the advent of 5G is likely to kick-start a new era of real-time low-latency mobile gaming and/or more immersive virtual reality experiences that will try to make full use of the vast broadband capabilities (and probably buffer). The capabilities of tech are constantly being pushed, and 5G won’t change that.

5G’s URLLC feature is all about low latency. Latency is the time it takes for a communication to start, stop and then start again, which you can experience every time you try to load a webpage on a smartphone.

On a 4G network it takes at least 40 milliseconds, but 5G promises to reduce that to just a single millisecond. Think about it; 5G could change everything we do online by making it instantaneous.

Cue the ‘tactile internet’. Defined as instant, interactive communications, the tactile internet could enable a revolution in industry, with robots able to receive instructions in real-time, essentially allowing them to collaborate on complex tasks.

In healthcare, surgeons could be able to see body scans and brain scans in real time, examine a patient remotely using a telepresence unit, and perhaps even remotely operate on patients using a surgical robot controlled across the internet.

Although a lot of the 5G talk is around video-based entertainment, a lot could change in the music world. After all, why persist with compressed MP3 and iTunes AAC files when hi-res uncompressed 24-bit/192kHz audio as FLAC, WAV and MQA music files are just as easy to stream over a 5G network?

Hi-Res Audio (HRA) is lossless audio codec capable of reproducing the full range of sound from recordings that have been mastered from better-than-CD quality music sources.

The massively increased bandwidth coming with 5G will likely popularize and normalize high-quality audio, which for now is a relatively small niche among audiophiles.

Those planetarium-style smartphone apps that overlay a map of the stars and planets on the night sky are what the future looks like.

No, not interstellar exploration, but 5G-powered instant overlays of real-time data on, well, everything. While those planetarium apps have all their data built-in and no need for real-time input and the augmented reality (AR) apps of the future are unknown, 5G could enable better navigation assistance, object recognition and even real-time face recognition on smartphones and smart glasses.

Take another, even simpler example; you have a boiler that needs fixing, so instead of getting a heating engineer around, you talk to one via your smart glasses and they show you exactly which knobs to twiddle in real-time to diagnose and physically fix the problem.

That’s going to be empowering. Everything from science, medicine, employee training and advertising could benefit from an explosion in AR overlays.

However, these rich, immersive ‘digital experiences’ will also spill over into virtual reality video, which could yet prove 5G’s ‘killer app’.

Real-time VR is presently not possible, but let’s be honest, how impressive really are VR headsets? They lack pixels – badly. Nothing looks real. What they need, of course, isn’t 4K, or even 8K, but probably 16K resolution, or multiple 4K video streams, and that’s what 5G could deliver. In real-time.

5. An internet of (many) things

A core 5G feature is mMTC, and that’s about density. It’s great news for sports fans. Never again will you sit in a packed stadium and be unable to use your phone.

That’s because 5G networks can support up to a million devices per square kilometer – but face-timing at the football is only one tiny aspect of what 5G will enable.

With that kind of support, the number of connected devices will explode. That Fitbit on your wrist? Why bother when you could have sensors all over your body – perhaps in clothes – that communicate with each other, and with the cloud via the 5G network, in real-time?

Everything you own could be connected to the network, such as your backpack, the belongings inside, headsets, headphones, bikes, car…and family members.

This could extend to industry as well, with companies’ assets, farm equipment, robots, and even tanks.

Another dimension of low latency is the real-time cloud. Instead of needing local processing power, devices like phones, wearables and laptops will link to the cloud for everything – files, data and artificial intelligence – perhaps only storing the absolute essential data on devices.

That means smaller, lighter and essentially ‘dumb’ devices that are little more than conduits to the cloud.