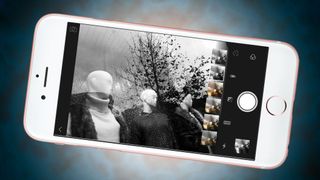 Lightroom Mobile is the tablet/smartphone companion to Adobe's desktop app, but a process of steady development has meant that it's more than just a tool for viewing your photos.

It's now possible to apply a large number of the desktop apps editing tools too, and your changes are synchronized back to your main Lightroom image library via Adobe's Creative Cloud service. You can also add ratings and flags to your photos, using your tablet as a kind of mobile image sorting tool.

Lightroom Mobile 2.1 for iOS adds support for the iPad Pro and multi-tasking in iOS 9. It also adds a sophisticated Point Curve mode to the Tone Curve and Split Toning tools. It now supports 3D touch, as found on the iPhone 6S, and the ability to launch the camera from the iOS Notification Center.

Lightroom Mobile is essentially a tablet-based browsing and editing app, so it would have been easy to miss the appearance of the camera function in Lightroom 2. It uses your device's built-in iSight camera, and while this may not match the quality of your DSLR or CSC you shouldn't be too sniffy about it because the latest 8MP and 12MP iSight cameras are rather good – and they may be the only camera you have with you when that shot of a lifetime presents itself.

The Lightroom camera app is rather good, made even better in Lightroom Mobile 2.1, which adds instant preset effects. These are in the style of regular Lightroom presets, so you can go back later, tweak the settings and make them come out exactly how you want – the presets are 'non-destructive', just like the filters in the standard iOS camera app.

It can't replace the standard iOS Camera app completely because it doesn't do burst shooting, HDR, panoramas or video – but it could be the perfect tool for stills photographers who want to take a little more time over their pictures and have them imported automatically into Lightroom.

Just five effects to start with

The only disappointment is that you don't get the full range of Lightroom presets to shoot with. In fact, you get just five: High Contrast, Flat, Warm Shadows, High Contrast B&W and Flat B&W. But it is a start, and hopefully Adobe will add a lot more, because this is a great way to shoot. You get to see the effect 'live' as you compose the picture, and this often has a big impact on how you want to frame it, the exposure settings and the angle you shoot from. And, of course, you can change the effect later in Lightroom, or add to it.

Lightroom Mobile 2.1 is available right now. You can download it from the iOS App Store and, if you already have Lightroom Mobile already installed, it should appear on your list of app updates.