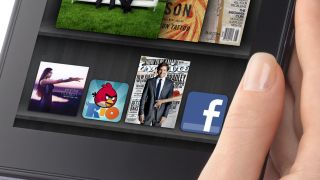 We reported earlier this month that Amazon may be looking at releasing a 7-inch and 10-inch version of the Kindle Fire 2, but news from Taiwan says you can add another one in there too.

According to a number of Taiwanese publications we are set to see three versions of Amazon's next Android-powered tablet: two 7-inch models and an 8.9-inch variant.

It's been reported that the 7-inch models will sport different screen resolutions, one with a budget-friendly 1024 x 600 display and the other with a mid-range 1280 x 800 screen.

No other details are known at this time, but if the reports are true expect the 8.9-inch version, with its HD display, to compete with the new iPad.

Apple may be looking over its shoulder as Amazon's Kindle Fire tablet was very competitively priced – and we expect the same from the next generation.