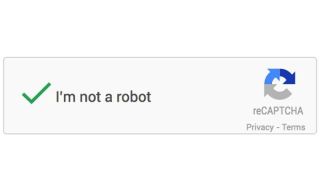 No mere computer could possibly solve this puzzle

It's almost a given at this point that robots will one day attempt to destroy the human race - even Stephen Hawking thinks so - and currently only one thing stands in their way: the Captcha.

These internet puzzles, which ask users to decipher some visual code or enter certain words or characters, are designed to tell the differences between human and computer users.

These riddles keep getting more and more complicated, but Google now says it has a better, simpler and more effective solution: a single click.

Google will replace many of its Captchas around the web with a checkbox next to the statement "I'm not a robot," the company announced today.

But it's not the act of clicking on the checkbox that tells Google you're a real, homegrown human; it's the way you do it.

Google Captcha team Product Manager Vinay Shet told Wired that the new Captcha system uses "a whole bag of cues," including the way you move the cursor, your IP addresses and cookies, and more, to tell you're human.

It's not perfect; in a week of testing 20% of Humble Bundle users and 40% of WordPress users had to take a secondary test that resembles existing Captchas. And touch screen users are being subjected to new picture-matching tests that ask them to, for example, identify several pictures with cats in them.

But if that's what it takes to thwart the robots then no doubt we'll find a way to endure somehow.