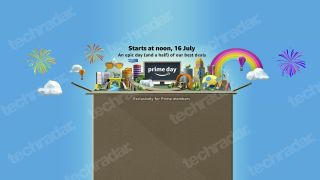 Amazon Prime Day 2018 will take place on Tuesday July 17th with deals starting at midday the day before - Monday 16th. That’s all according to a Prime Day 2018 banner published on the Amazon UK website - presumably in error - and discovered by TechRadar this morning.

The 36 hour period for Prime Day 2018 makes it the longest Prime ‘day’ ever - providing final and clinching proof that Amazon cares not for the mental health or sleep patterns of TechRadar's hard working deals team. It eclipses last year’s 30-hour period which started the evening before at 9pm and also breaks with Amazon’s recent tradition of running Prime Day on the second Tuesday in July.

Our original prediction for Prime Day 2018 was that it would take place on July 10th and 11th - but those are, of course, the days of the first and second semi-finals at the FIFA World Cup in Russia - not hard to see why Amazon would want to avoid those dates. With the World Cup Final scheduled for July 15, that leaves the stage clear for Amazon’s two-day Prime Day bonanza on the 16th and 17th.

The dates we have above are for Amazon Prime Day in the UK but - assuming this is not all an elaborate practical joke from Amazon's design team - the exact times are likely to be marginally different in the US where of course there are multiple time zones.

Last year, Prime Day began at 9pm Eastern / 6pm Pacific, and ended at midnight Pacific. So our prediction for Amazon Prime Day in the US this year is a midday start on the 16th EST, running all the way through until midnight on the 17th PST - that would mean Prime Day 2018 running for 39 hours in the US.

In terms of what deals to expect, you can certainly count on an Amazon Prime subscription drive in the days or weeks leading up to Prime Day 2018. Prime Day deals are exclusively available for Prime customers so Amazon tends to run a recruitment drive before the big day - expect a £20/$20 discount on the usual subscription price if you’re not already a Prime member (if you are already a member you’ll probably be out of luck on that one).

Prime Day deals will obviously include heavy discounts on Amazon devices like the Echo, Echo Dot, Fire TV Stick, Kindles and tablets - Amazon regularly runs discounts on these items throughout the year so there’s a very good chance that for Prime Day it’ll haul out its cheapest ever prices on at least a few of these items if not all. You should also expect some tempting offers for some of Amazon’s other services like Audible.

Aside from that, we’re also expecting Amazon Marketplace sellers to get in on the act in a big way this year. They’ve been included since the first Prime Day in 2015 but this year we’re forecasting that Marketplace retailers could be the source of some of the more exciting deals in pretty much everything product category on the site, from 4K TVs (post-World Cup firesale alert), games consoles and laptops to beer and wine, sports and camping, and baby products and fashion.

We’ll have an army of deals hunters working around the clock on Prime Day looking for what look like the best products and the best discounts - so bookmark TechRadar's Prime Day hub and we’ll ensure you don’t miss out on the best Prime Day deals.