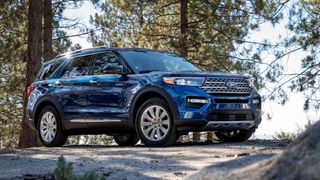 Life in the digital age can be a little complex. Our phones buzz, chime, beep, and alert us at all hours of the day. We have bots that can tell us the weather but are also listening to everything we say. In a car, it’s even worse. A multitude of safety features beep to tell us we’re drifting out of the lane, and phone calls that pop up on the dash can be annoying.

And then there’s the 2020 Ford Explorer. In a recent test, I was digging through the center console settings – on a glorious new 12.3-inch screen – and I found a rather subtle option called 'calm'. There’s a similar setting on the screen above the steering wheel. While the calm option doesn’t quite do everything I want it to (yet), it is a step in the right direction.

In that center console, calm turns off everything and just shows a clock on a pale blue background. It’s a way to remove distractions, including the navigation, radio, and the Apple CarPlay connection. In the screen above the steering wheel, it turns off everything except the speedometer, so you can’t see any of the safety options (although they continue to function).

I really like what Ford is attempting to do here. It’s a way to remove almost every blinking light on the screens to allow you to focus on the simple act of driving. The calm setting doesn’t actually disable anything, and you will still get chimes and interruptions on your phone.

During one drive, I was using the calm setting and still received a phone call. That means it’s mostly an interface choice for what you can see while you drive, but it still worked for me.

With the screens blanked out, I didn’t feel as inundated with information. In the next iteration, it would be cool if it was not even possible to select a radio station, and maybe you could use a voice command like 'deactivate calm' to make non-safety features available again. I know the technology is already available since the Ford MyKey system can lock out the radio if the driver doesn’t fasten their seatbelt (yes, it is more of a teen driver feature).

My mind jumped to how this might work in all areas of life.

At home, I’d like to be able to give one command to Alexa or the Google Assistant and have those bots lower the lights and the blinds, disable incoming calls and turn off all beeps and chimes from my home security system.

At work, if I need to focus on a project, it would be cool if there was a calm setting on my laptop that turned off all incoming emails, dimmed the screen, and blocked notifications in Chrome. (I particularly hate those browser notifications, although Google is apparently working on disabling them in a future version.)

And then there’s my phone. I know it’s easy to turn off Bluetooth and Wi-fi, and to turn off notifications for apps all at once. That doesn’t really help me deal with emails that arrive using my cellular data connection (unless I turn that off as well). And, it doesn’t disable any apps. What I’d like with a phone is similar to the calm setting on the Explorer: A mode that only shows the clock and a few critical apps, but otherwise disables everything else.

For now, I like the calm mode in the Explorer. I used it more than I would have expected, possibly because distractions are becoming more common and I just need the peace.