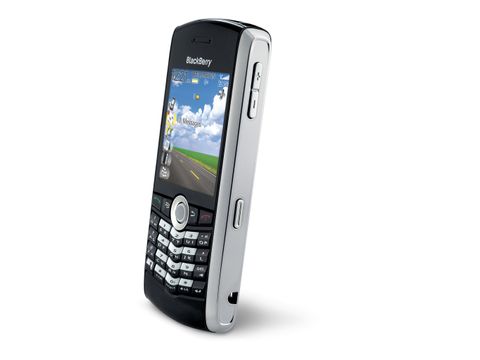 Taking Blackberry into the next generation

It's a Blackberry by any other name, but this one comes with upgrades

What are the two important features vital to the success of a mobile phone right now? Spot on: a serviceable digital camera and some kind of media player are the headline grabbing functions featured in most of the current crop of desirable devices - and virtually a minimum requirement for all but the cheapest of handsets.

The fact that RIM has been so successful with its BlackBerry devices while ignoring these guidelines shows just how powerful a pull its push email service has. Or, at least has among the business classes who have their phone given to them by bosses keen to keep in email range at all times.

But RIM has obviously decided that always-in-the-office-even-when-we-are-out-of-it suits aren't the only avenue it needs to explore for long-term success - especially as companies are generally happy to stick with handsets for years without upgrading them unless they are lost or irreparably damaged. So, it's 'normal' mobile users RIM needs to target, and its solution is the Pearl 8100: undoubtedly the best-looking, most consumer-friendly BlackBerry yet.

The first major new feature on the Pearl is the form factor. Not only does this handset weigh in considerably smaller than the BlackBerry 7130, but it also looks like a style phone - having more in common on the looks front with Motorola's SLVR than previous RIM devices. And those smartly angled keys look the business too - although the full Qwerty keyboard of the 8000-series is missing, RIM instead opting for the doubled-up lettering of the 7130, but with a slight design twist.

The Pearl is really something to behold, and when compared directly to the previous smallest BlackBerry it looks titchy. It fits in your hand easily, and is also thin enough to pop it into a back pocket. This is a seismic shift, and certain to open up the appeal of the device.

The other big news is the inclusion of a camera, something that marks a departure from the trend of serious business phones to drop the camera for security reasons. However, the snapper is not quite up to current high-end speed, being a 1.3-megapixel model rather than the 2.0 that many mid-range phones now sport. It's better than nowt, mind, and again certain to make this handset more appealing to the average consumer.

Another big feature is the addition of a media player. It's capable of both music and video playback, and the Pearl also sports a stereo headphone jack to get the sonics out of it. It can't record video though, which again leaves it in the wake of a lot of premium phones.

With media comes the need for more memory, and in addition to the 64MB of internal RAM this is the first BlackBerry device to incorporate a slot for a microSD card. The slot itself is below the battery, which means that there's no hot-swapping of memory, but you can't expect everything all at once!

With all this extra media functionality you'd expect the 8100 to have a big screen to take advantage of it, but sadly the form factor takes precedence here and the device has a smaller screen than its predecessors at 2.25 inches across the diagonal. Still, it's bright and clear enough for normal use, although with the real key feature - that email service - we found it slightly cramped compared to the rest of the current range.

Something else that's missing is the thumb wheel on the right hand side of the phone. Maybe it's just the fact that we are used to using it and all previous BlackBerry devices we've come across have had one - but it's something we think BlackBerry regulars will miss.

However, newcomers to the device - and it's certainly aimed at newbies - will be far more comfortable with the trackball-style controller that's located in the centre of the device just below the screen. RIM is obviously very pleased with it, because this is the 'pearl' from which the handset takes its name. Using it proves tricky at fi rst, but you'll soon fi nd it a nifty way of navigating around the menu screens. And it's a welcome change for left-handers too...

Elsewhere, things pretty much stay the same as with the rest of the range. There's a collection of organiser software that synchronises with your computer very well to transfer all your appointments and contacts across to the Pearl - something that's even more important when you have to enter email addresses as well as phone number!

There's also a lot of messaging software on there, with offerings from Yahoo, Google and BlackBerry itself, which coupled with the web-based email - plus the Enterprise system that's less likely to be used on this phone - means it's certainly got all the bases covered when it comes to staying in touch.

In action the changes don't seem to have made that much difference to the way the POP3 email service works: which is incredibly well. As we were looking at this from a consumer rather than corporate perspective we didn't get to check out the Enterprise Activation system corporates use, but for the rest of us the web-based system is first rate. Emails come and go with a frequency that truly makes you feel connected.

The SureType keyboard takes a bit of getting used to, but you soon speed up, however the design touch of the 'v' shape makes it a tad trickier to use than the one on the 7130. The predictive text systems works well though, although many people may prefer the multitap method of entry.

Call quality is close to that of previous models, although there was some hollowness to voices. Also, the method of getting into the contacts and choosing what number to call is long winded when compared to the system on, say, a Windows-powered smartphone.

Of the new features, the camera proved passable, but not fantastic, and we won't be printing out too many of the shots we took with it. The same can be said of the media player, which proved diverting, but didn't match the best Walkman offerings out there.

The smaller screen must help things on the battery life front, although the claimed ratings are lower than on the bulkier 7130. If you are going away for a couple of days we'd recommend taking along that charger - although handily you can charge it directly from a computer using the USB connection.

It remains to be seen whether this BlackBerry will win over the masses. It looks fantastic and has some great new features, but the email services still add a large premium on to your bill if it's only for fun. But what isn't in doubt, is that the stylish look and improved features make this the ideal BlackBerry for the normal user.

Trackball: The central navigation ball located just under the phone's display gives the Pearl its name

Qwerty keyboard: RIM uses a two-characters-per-key approach with a its SureType technology

Camera: This is the first BlackBerry to come with an onboard camera - it's a 1.3-megapixel affair

Memory card: Another first for the BlackBerry - expandable microSD card memory, with a slot under the battery