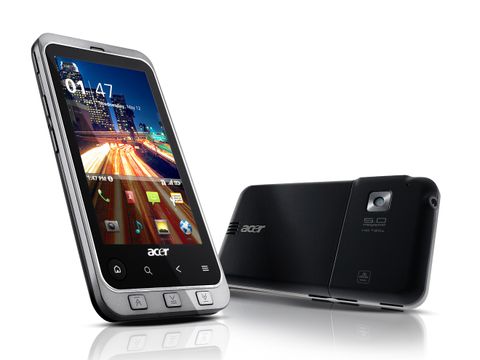 A decent effort, but we can't see why you'd take it over some other handsets on the market at a similar price, so make sure you have a really good play with this somehow before you fork out.

There has also been the Liquid E, an Android 2.1 upgrade of an earlier handset which we thought had potential but which failed to live up to its billing.

Acer keeps forging ahead with new launches, and the latest, the Stream, looks on paper to be a stunner.

Alongside the essentials of 3G, Wi-Fi and GPS, we have a nice large 3.7-inch AMOLED screen with an 800 x 480 pixel resolution, 1GHz processor, 720p video recording, HDMI out, a 5-megapixel camera and really nice-looking build quality.

And while Acer barely touched the Android user interface on the Liquid E, the Acer Stream is fully skinned. This is potentially a worry because Acer has not been wonderful at skinning operating systems in the past.

But we were hoping from the outset that the Stream might be able to rival HTC's super Sense user interface.

In the end the reality lies between the two. HTC Sense is still the one to beat, but Acer has made a pretty good job with skinning on the Stream.

As you'd expect from those specs, the Acer Stream doesn't come cheap. At £399 SIM free, it's actually a shade more expensive than the HTC Desire.

Of course, it's brand new, so its price may fall and come into line with the Desire over the next few weeks.

Even before getting to the software, there are things to like about the Acer Stream. The physical design is streets ahead of what we've seen on recent Acer smartphones.

There is a metal-look finish to the border of the front, with a black screen-surround that houses four touch buttons.

However, it's got a very 'industrial' feel to it - like the phone is bigger than it needs to be all round, with a very chunky chassis.

These buttons perform the usual Android functions – Home, Search, Back and Menu. The Home button, in a circular surround, glows red when the Stream is charging and green when the charge is complete.

All the buttons have a white backlight when one is pressed, and there's a teeny bit of haptic feedback at that point too.

Where the Acer Stream differs from other Android handsets is in the presence of three further, physical buttons at the very bottom of the front chassis. Marked with arrows these are media controls and provide previous/rewind, play/pause, and next/forward functions.

They work when you're listening to music, so you can control playback while in another app, which is very useful.

They also work while you're watching video over the HDMI output, but not when viewing still images.

The edges of the Acer Stream are only very lightly peppered with buttons. The bottom is completely clear, the top has a 3.5mm headset jack.

On the left, there's the main power button and a volume rocker, both of which are extremely thin.

The right edge houses an equally thin camera button and, under a rubber hinge with a central pivot, the micro-USB power/PC connect cable and mini-HDMI port.

One slight grumble about the side buttons it is that the micro-USB and HDMI ports are a little fiddly to get to, because the rubber cover gets in the way.