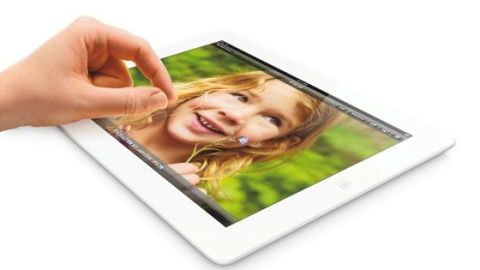 Recommended
Summary: a bit faster with a smaller connector

The new iPad 4 is now running ahead of the pack thanks to iOS 6, and with it comes a whole host of new fancy features.

However, before we go through what's new, we'll take a quick tour across the operating system to show just how simple it is to operate a new iPad.

The home screen is laid out in a very similar way to the iPhone, except we're seeing some much larger icons for the apps you've downloaded.

You can fill as many home screens as you like with apps as you download more from the App Store, and swiping from screen to screen on the iPad 4 is silky smooth even with loads of programs downloaded.

There's also the dock at the bottom of the display which can hold up to six regularly-used apps that are present on all home screens, which is more than the four on offer with the iPhone thanks to the extra screen real estate.

Neat freaks need not despair either: it's easy to create folders of the apps you want to lump together simply by dragging an icon and plopping it on top of another – the iPad will create a name for the group based on the content, but it's easy to rename these.

iOS 6 doesn't offer too much in the way of new features for the user interface, but a trick that Apple has learned from Google's Android is the notifications bar, which can be accessed simply by swiping down from the top of the screen.

This contains information on everything from unread mail messages to notifications of new moves in games you're playing with friends. It's a simple system and one that's prevalent throughout the system, even in most apps, meaning you can easily jump in and out of applications where necessary.

You can also now post a tweet or a Facebook status update from this bar as well - while it's not the easiest place to share a link directly from, if you just saw a squirrel do the moonwalk time is of the essence when it comes to telling people.

Speaking of which, it's worth taking a look at the multi-tasking gestures on offer, as they're pretty sensational. Using a full set of fingers on the screen allows three functions: pinching in will take you to the home screen, flicking up will enable the multi-tasking window and swiping left will let you bounce between open apps.

It really works on the new iPad, and we urge you to check it out as it really makes moving through the system easy and cool at the same time.

There's a great debate over what really constitutes multi-tasking – but in our view, the iPad does enough to warrant the title. The likes of the BlackBerry Playbook are more capable when it comes to fully running programs in the background, but most users will struggle to really notice the difference when the iPad and its Android competition are asked to jump between apps.

As mentioned, you can easily multi-finger swipe up or double tap the home button to call up a list of recently opened apps, which can be deleted from the tray by a single long press and tapping of the 'x' that appears.

Swiping right in the multi-tasking tray will also call up the music player, which allows you to see what songs are about to play, or change the volume or brightness. Not new, but the closest thing to a widget we'll get here.

The lock screen allows you to do some pretty funky stuff; double tapping the home button will call up the music player so you can switch tracks or pause without needing to open the iPad. Also, there's an option to have a slide show of your photos – although we've all got some we don't want to see cycling past at times.

The iPad interface is one that's a little hard to judge, as it's so subjective we're bound to be chastised for the manner in which we rate the OS. However, in our minds it's too simplistic these days, with no opportunity for real customisation, and that's something we've been hoping Apple will fix for years.

The good news is Sir Jony Ive is taking over the design of the OS, and we're hoping to see some really big changes when iOS 7 rolls around.

But then again others hate overly-complicated user interfaces, and they'll love the simple icon-centric offering. There are other foibles, like apps not re-aligning when one is deleted off a screen, but there are examples of this happening on other tablets all the time, so it's hard to criticise the iPad specifically.

Does the iPad 4 really do enough to be the poster boy for the iPad generation, with the all new A6X chip adding more smoothness under the finger? Yes. It's erased the slowdown we sporadically experienced with the iPad 3, and brings a more 'flawless' nature to Apple's line up.

Compared to the iPad 2, there's an increase under the hood from 512MB of RAM to 1GB – given the previous iteration had a decent level of snap between programs, the new iPad doesn't really need to push things too much harder... but if it makes apps loads that little bit more quickly and doesn't eat battery, then we're fans.

Basically, if you want simple and a mostly slick user interface, then you're in for a treat. It's not the most complete system out there, and while iOS 6 is showing its age it's still a more than acceptable platform to power Apple's most complete iPad.

Prev Page Introduction and design Next Page Contacts and FaceTime