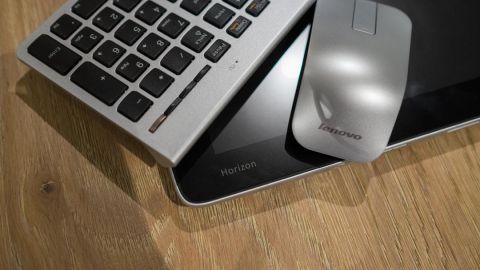 The Lenovo Horizon 2s, the smaller, $949 (£899, about AU$1,084) sibling to the super-sized Lenovo Horizon 2, joins in a growing line-up of portable all-in-one PCs with touchscreens. In other words, giant Windows tablets with stands. Similar to the Dell XPS 18 Touch, this is a small all-in-one Windows 8.1 PC with a 1,920 x 1,080 touchscreen display.

Fold in the kickstand and you have a 19.5-inch tablet that can go almost anywhere. There's even a handy bag included in the packaging. However, there are a few flaws that might prevent you from taking this jumbo tablet very far.

The Lenovo Horizon 2s shares a lot of similarities with its massive 27-inch sibling, the Horizon 2, including the rubberized feet on its back. Also, just like before, Lenovo's Aura multimedia software automatically launches when the system is laid flat. The Horizon 2s also sports a handy NFC sensor for quickly transferring photos and other files from phones or smaller tablets.

But unfortunately, reduced size also means reduced features. Although the Horizon 2s has a built-in 3-in-1 media card reader, it only offers two USB 3.0 ports and lacks an HDMI-in. The system reviewed is loaded with an Intel Core i5 CPU, 4GB of memory, and a 500GB hard drive. The Horizon 2s also relies on a comparatively weaker Intel graphics chip, which means it doesn't handle 3D games very well.

Configurations with a slightly better CPU and more memory are available, but not all models are found globally. The Lenovo 2s is available in the UK, and its similar model sports twice the memory, but the system is not yet available in Australia.

The Horizon 2s's rubberized feet are there so that the screen can be laid down flat. Doing so automatically launches Aura, a multimedia application that's designed to be used by multiple people at a time to access files as if they were digital cards.

With a touch, users can watch videos, slide photos around, and listen to music, among other activities. The non-glare, matte screen responds well to multiple touch commands, and the software has a few entertaining features. For example, you can download an app to your Android phone so that the Horizon 2s can access media files directly from it via Wi-Fi. You can either shake your phone to "throw" files onto the desktop, or lay it onto the screen for less animated access.

Manipulating media files is fun for a little while, but the Aura software has very limited practical use. In fact, it can get annoying, since the application always launches when the screen is tilted too far back. It can make it difficult to watch movies with the screen resting on your lap.

Although the Aura software comes with a collection of games, the system doesn't come with any accessories, like Lenovo's e-die, striker, or joystick that make some of them more fun. But you probably wouldn't want to play any of the games for very long anyway, since the system gets very hot when it runs intensive applications.

Furthermore, the Horizon 2s has a terribly short battery life. In my experience, the battery lasts for about an hour or so, even when it is used for straightforward tasks, like browsing the internet and watching videos.

The Horizon 2s may be significantly more portable than the 27-inch counterpart, but no matter where you go, you'll need to stay close to an outlet. This drawback is especially disappointing when you consider how the Dell XPS 18 can go for over three hours between charges.

The Horizon 2s's design is a little too minimal, even for a small all-in-one system. Its kickstand doesn't offer the same kind of versatility the Dell XPS 18's dual legs offer, and it can be a little unreliable.

For instance, if I didn't notice that the kickstand wasn't out all the way,the computer would fall over. Luckily, nothing was broken, but the incident did leave me a little wary of the kickstand's reliability.

If a little kickstand isn't your thing, then you can pick up that optional, aluminum stand for $89 (£199, about AU$70.25) on Lenovo's website. The power cord plugs directly into it, allowing the computer to charge from its connectors.

However, it comes with quite a few quirks, its biggest being that it's not very heavy. Additionally, its cradle is magnetic, which feels like an over-designed precaution. When I pick the screen up, the stand comes up with it until it slides off. There's a little trick to leaning the screen forward before removing it, but this doesn't foster the same kind of pick-up-and-go feel that the Dell XPS 18 does.

Then there's the matter of Lenovo's included accessories, which almost always drive me crazy. Like the Horizon 2, the system does not come with a full keyboard. Instead, the notebook sized wireless keyboard features half-sized Tab, Caps Lock, Backspace, and right Shift keys, which can make typing a chore.

Although the keyboard has a good weight, it can be a real pain to use a keyboard that doesn't have a Caps or Num Lock indicator on it, especially when you have to type in passwords. The included mouse has a good size to it, but its surface has a silicone coating on it, which makes it feel gummy, and you can feel the dust and dirt sticking to it.