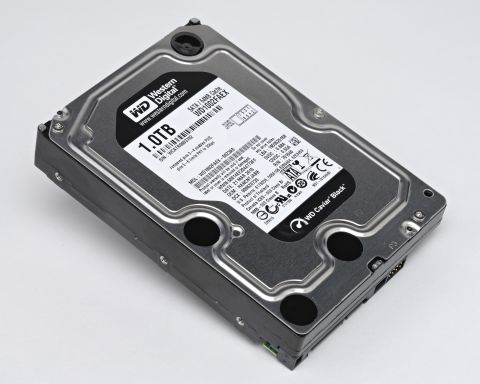 A terabyte drive on the latest SATA standard

In a word, capacity. The cost per gigabyte of SSDs, even modestly sized drives such as the new Patriot Inferno 100GB, remains several multiples more than a magnetic hard disk.

In fact, the bigger you go, the more massive the price gap. 1TB SSDs are now available. But where the Western Digital Caviar Black 1TB is yours for just £75, the likes of OCZ's Colussus LT 1TB SSD retails at £2,500.

That's beyond a joke.

Clearly, old school hard drives are still the only realistic option for mass storage of data-hungry files such as video, audio and high-resolution images.

But if you want the best possible performance from your big data bucket, the new Caviar Black 1TB sports a number of speed-friendly features including 64MB of cache memory, Native Command Queuing, dual processors and SATA 6Gbps support.