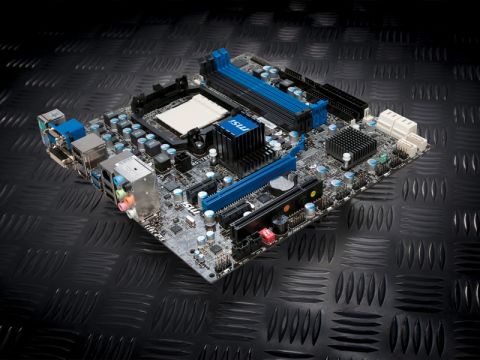 Are you ever likely to run two AMD video cards in multi- GPU CrossFire mode or use a second graphics card as a physics or GPGPU accelerator? The honest answer is: it's unlikely.

What you probably don't need, in other words, is a full sized ATX mobo with a silly number of PCI-e slots. A micro-ATX board with a single graphics slot and some enthusiast-friendly features will get the job done just fine. Enter, MSI's 880GMA-E45.

Powered by AMD's middling 880G chipset, it's bang up to date and offers enough power features to keep most enthusiasts happy. And all in an extremely compact and reasonably cost effective package.

Bandwidth wise, there's bags thanks to MSI's decision to go with the more powerful SB850 southbridge and its six port's worth of SATA 6Gbps. Next up is Gigabit Ethernet, a couple of USB 3.0 sockets and official support for DDR3 memory up to 1,333MHz.

This board may be a bit puny. But when it comes to lugging data around, it's well equipped for heavy lifting.

Like most current AM3 boards, it's ready to roll with AMD's latest six-core chips, too. Overclockers will also appreciate MSI's so-called "Military Class" components, including solid core aluminium capacitors.

Less promising is the apologetic-looking heat sink covering the northbridge chip and the absence of any cooling at all for the MOSFETs. As for graphics, you get an integrated Radeon HD 4250 core with 40 shaders but no sideport memory.

As ever, the prospect here is a combination of feeble 3D performance and solid 2D features. DVI and HDMI cover the digital connectivity, while a VGA port caters for analogue Luddites.

Genie in the BIOS

However, pop into the 880GMA-E45's BIOS menu and things get interesting. For starters, MSI's familiar overclocking Cell Menu provides all the clock, voltage and timing options you'll ever need.

If you don't want to get your hands dirty, the OC Genie feature claims to do the job for you. The final feature of note is MSI's Unlock CPU, allowing you to expose those naughty hidden cores in certain AMD Athlon and Phenom CPUs. Promising stuff all round and we're happy to report that it translates into solid real-world performance.

The SATA 6Gbps ports do their big bandwidth act, topping out at 375MB/s with our Crucial test SSD. Application performance and gaming grunt using a discrete graphics card are likewise up there with the best.

In the overclocking stakes, the 880GMA-E45 puts in a very respectable performance: 300MHz on the bus is a 50 per cent overclock and as much as you'll ever need. Even better, the OC Genie function breaks with form and produces decent results, ramping up our 3.2GHz Phenom II X4 test chip to 3.65GHz.

If you're looking for downsides, there aren't many. The memoryless integrated GPU is about 25 per cent slower than similar solutions with 128MB of Sideport Memory. You also miss out on a few frills including physical onboard switches for power, reset and indeed the OC Genie feature.