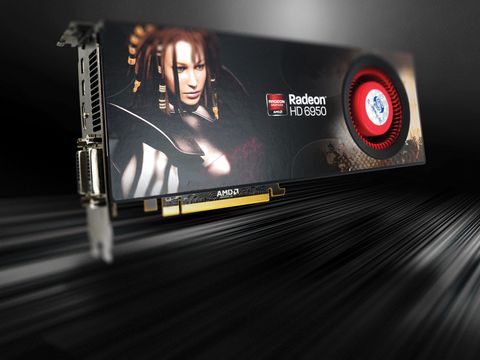 A solid card for the cash, only trailing the more expensive Nvidia GPUs by a few FPS

With the Sapphire Radeon HD 6950, we're getting into serious graphics card territory here, and inevitably that means serious money too. At over £200 that's a lot to spend on a single component if you're talking about an upgrade purchase.

But it's AMD's latest, and arguably greatest, GPU technology inside that Cayman processor and it's got some heavy-weight DirectX 11 graphical architecture backing it up.

Taking the seriously GPU taxing DirectX 11 tessellation-heavy benchmark of Metro 2033 there is no Nvidia card that can come close to managing double-figure frame rates at the highest 2,560 x 1,600 resolution until you get up to the £400-odd GTX 580. And even that card can only manage an extra 2fps over this impressive GPU.

It was an odd one from AMD's perspective as it launched both the HD 6950 and the other Cayman-powered card, the HD 6970, at the same time.

Despite the fact there was a gulf of around £80 in cost, there was very little between them in terms of raw performance. In the overclocking stakes the HD 6970 had the edge, but that was only down to the fact AMD had artificially limited the clockspeeds on the HD 6950 so as not to allow people to push the cheaper card as far as it's slightly more powerful brethren.

Stranger still was the fact that barely a week after release there was a BIOS flash for the HD 6950 that enabled you to open the dormant parts of the Cayman GPU to essentially turn it into a HD 6970 for free.

That has made the original reference HD 6950 very much the hero card of the hour, and also much sought after.

Some recent respins though have come either with the dual BIOS switch disabled, or with lower frame buffers, both of which stop any flashing shenanigans you might wish to perform.

From a cynical point of view though, you could say it wasn't a coincidence that this happened at the same time AMD launched its multi-GPU HD 6990. Word from leading AMD manufacturers suggests we could still see new HD 6950s with the flashing reinstated.

As a graphics upgrade though, especially on the AMD side of the CPU war, the HD 6950 is definitely the one to aim for. It represents a huge step-up in power, even with the weakest of the CPUs, and when compared with the much more expensive GTX 570; that though, is on the AMD side.

When you factor in an Intel CPU based platform the AMD cards suddenly don't look quite so capable, and the more expensive Nvidia GPU wins the day.