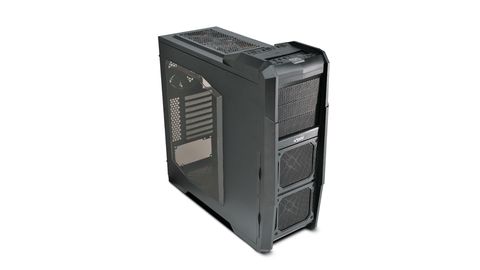 Spire is probably better known in the UK for cooling products rather than cases, which might explain why there's more than a little of the Cooler Master HAF series about this X2.6011 chassis.

That's definitely not a bad thing as the High Air Flow range of cases have been among the most popular enthusiast PC chassis of recent times. Can Spire, with its wealth of cooling knowhow, compete?

The easy answer is a most emphatic yes. Like the HAF chassis, the X2.6011 is all about airflow, and the impressive pre-installed cooling arrangement on offer with this sub-£100 case is excellent.

With a pair of LED-lit fans on the front and a pair expelling air from the roof with another, single, plain exhaust port on the rear, you're good to go straight out of the box. You've also got a fair amount of instant control over the different cooling arrays.

On the front panel, set back behind the slide-covered I/O ports, are three separate switches to control the front, rear and top fans. There's not a huge amount of granularity about your control, though, with only three settings: low, high or off.

That last option is a rare addition, but if you're just watching a movie on your PC, you won't need serious cooling, so being able to shut the fans down individually is a rare bonus. That said they're all whisper-quiet Spire fans, so they're not going to be roaring the house down anyway - even at full blast.

The internals aren't bad either, but we do have to get one relatively minor niggle out of the way. Despite the enthusiast-class leanings of the X2.6011 there's no support for the extended ATX class of motherboards - such as the Gigabyte Z77X-UP7, or the top-end RoG boards from Asus. That will restrict your motherboard choice a little, and knocks the X2.6011 off the top table.

That's a theme that continues when it comes to the type of graphics cards that you'll be able to drop in - one of the two drive bays is easily removed so you can fit up to 430mm long graphics cards without a problem. Considering the massive Radeon HD 7970 is less than 300mm long you've got room to grow.

Considering the sub-£100 price tag of this roomy chassis you're getting an awful lot of case for your money. It's got all the requisite modern trappings of an enthusiast case, and limited mobo compatibility aside, it's as complete a chassis package as you could want.

We've been rather impressed by the solid build quality and the ease with which it's possible to jam in your components. The aesthetics may all be function over style, but when a case works this well it's tough to argue with.