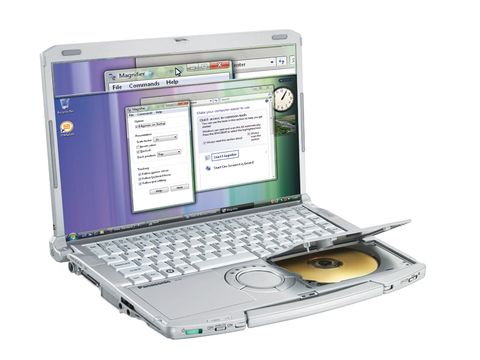 The Panasonic Toughbook's keyboard can withstand a soaking, but what about the rest?

The CF-F8 ToughBook is in the lowest of Panasonic's four categories: it's a 'business rugged' model. This means that it can take a tumble from a rather modest 76cm, and it's also spill-proof.

Panasonic claims that if you spill a glass of water on the keyboard not a single drop will penetrate the interior of the laptop. It must be said, though, that since none of the connectors or slots have protective covers, it wouldn't be as forgiving to sprays of water from other directions.

Given that this is a minimally rugged model, it's not surprising that the CF-F8 is among the most highly specified rugged laptops in terms of performance.

With its 2.26GHz Core Duo processor, 14.1in widescreen display and DVD drive, this is a laptop that can hold its head up high alongside more mainstream models. However, it's questionable how many users will be prepared to pay the fairly hefty price premium for such a modest level of protection.