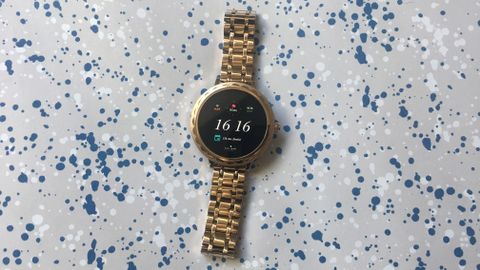 The Kate Spade Scallop is a great option for those who like their tech to look like jewelry. Despite its cute style credentials, performance-wise it’s as good as some other Android Wear smartwatches, making it a solid choice that’s far from just a pretty face.

Debuted at CES 2018, it’s the brand’s first touchscreen smartwatch that pairs Kate Spade’s aesthetic with an Android Wear watch that’s good enough to rival most (but not all) on the market. At £299 / $295 / AU$499 it's a pretty good price for such a good-looking and capable device, but it won’t appeal to everyone.

The smartwatch is built with women in mind and that feels like a genuine consideration for a change rather than adopting the ‘pink it and shrink it’ strategy or just taking a man’s watch and stripping hardware and features away. Instead, it’s a good-looking and stylish gadget we can imagine some women choosing to wear everyday.

But its design is one of its strongest points yet also one of its weakest, depending on your tastes. It’s quirky, bold and feminine, and has a strong Kate Spade pedigree that’s bound to appeal the most to Kate Spade fans who have been keen to dip their toe in the smartwatch waters.

For those who like their tech to be minimal, hidden and functional, it’s worth looking elsewhere.

The smartwatch is running on a Qualcomm Snapdragon 2100 chip and connects to both Android and iPhone phones via Bluetooth. It does all of the things you’d expect from an Android Wear device, including notifications, third-party apps, music with 4GB of storage, Google Assistant voice controls and basic activity tracking.

Regardless of what you think of the watch, it’s a good move from Kate Spade. The brand is well-known for being a forward-looking fashion brand that really considers its shift towards tech.

At those prices, the smartwatch may seem a little pricey, but considering it’s an Android Wear smartwatch and it’s Kate Spade approved, it measures up well.

Then when it comes to similar Fossil Group watches, the Michael Kors Access Grayson and Access Sofie are a little more expensive at £349 / $350 (around AU$590). On the other end of the Android Wear scale, the Asus Zenwatch 3 is a little cheaper at around £230/$200.

So there are cheaper Android Wear watches available, but as we’ve already stressed, this one is really about style and Kate Spade credentials.

It’s also worth considering that the Kate Spade Scallop looks and feels just as high-end as any other designer smartwatch, which we all know plenty of people are happy to blow a small fortune on.

The design of the Kate Spade Scallop is really something to write home about. It’s Kate Spade through and through, with the fashion band’s trademark scallop design round the edges and its insignia on the crown.

There are also a number of other quirky touches to cement the Kate Spade aesthetic, like the option to add animations to the watch face, from a daisy with falling petals to a New York taxi, a winking eye and balloon numbers.

To those not in the know about Kate Spade, these may seem like random choices, but for a brand built on cute and colorful touches with a solid New York heritage at its core, they’re really nice additions.

The watch itself has a 1.9-inch touchscreen OLED display with a 390 x 390 resolution and an ambient light sensor. Its screen is one of its biggest draws, it’s big enough to see everything you need to see in detail, it's crystal clear and you can customize the brightness to suit you.

But a big screen means it’s quite a big watch, especially for women. Its casing is 42 x 46mm and the case thickness is 9mm. Although these are pretty standard dimensions for a woman’s watch on the larger side it does feel bulky. As with most watches, this takes a little getting used to, especially if you’ve been using a light wearable, like one of the Fitbit range.

But then its bold size fits the Kate Spade look too. The brand’s accessories often make a strong and colorful statement and the Scallop is no exception.

There are three different styles to choose from, there’s gold and rose gold with a leather band or rose gold with a premium link band, which is what we reviewed. But all of the straps have a quick release mechanism, so you can easily switch them out. Fossil Group has suggested it’ll be expanding its range of bands but you could get one elsewhere.

The strap we tried took a while to get used to given we’re accustomed to using buckle style wearables, but after a few days it certainly became second nature. The only time it became uncomfortable was at the gym, so fitness fans beware. But anyone who has used a traditional watch with similar, metallic links will likely be used to taking it off to workout.

Also it’s worth mentioning you'll need to take it to a watch store to have the links adjusted, which may see you incur an additional cost.

You can customize the Scallop’s watch face with either Kate Spade-ified animations, or more simple ones. According to reports, it’ll deliver new watch faces every quarter. We particularly liked the balloon numbers, called Balloon Digital, as well as the really simple digital display, called Core Digital.

Overall, the Kate Spade Scallop serves up a really similar experience to many other Android Wear watches on the market, particularly those that are part of the new Fossil range.

But one thing that stands out when it comes to looks is an app called Choose Your Look, which lets you customize your watch to the rest of your outfit. You select the time of the day, the color of your clothes and bag, as well as the tone of your jewelry and the watch will create a custom face with colors that are designed to complement your outfit.

For some people this might seem a bit gimmicky, but for those who want their tech to be a style accessory as much as a smartwatch it’s a nice touch and sets the device apart from other Fossil collaborations.