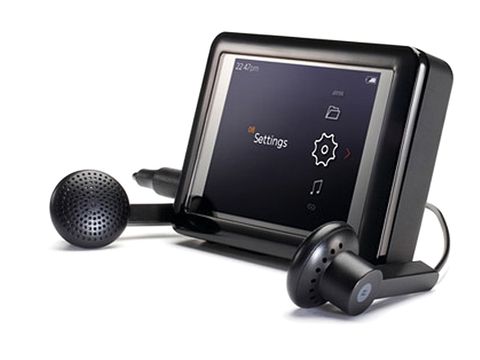 The Lplayer is straightforward to use, especially with the help of the onscreen prompts

A cute and well-featured device, let down by its woeful battery life

With only a sprinkling of buttons running along the sides, you could be fooled into thinking operation comes via the touch-sensitive 2-inch screen. However, iRiver has devised the D*Click system where the four edges of the screen are mechanised pads.

It's straightforward to use, especially with the help of the onscreen prompts, but we found the mechanism overly sticky and really had to press hard at times to get a response. It's not too exasperating, but after using more user-friendly rivals, just a little annoying.

You can use Windows Media Player to manage your digital tunes for transferring or set it up as a mass storage device. iRiver does provide its own Plus3 media software that converts videos into compatible formats.

Even without any sign of equaliser options to boost the audio, the Lplayer still manages to sound lively, although it's quite sludgy, with an over-reliance on the bass for drive.

Video playback fairs much better and the QVGA-quality screen is sharp, despite lacking the cutting edge of the nano. The Lplayer's FM radio is a nice touch and is much better at holding a signal than some of the competition such as the Sansa Fuze.

Our biggest disappointment with the iRiver Lplayer is its woefully weak battery life. Its 12 hours could be major reason for not choosing the player.

This is a real shame because its diddy physique, unique design and £100 price tag would have made it a viable option for those wanting to avoid Apple.