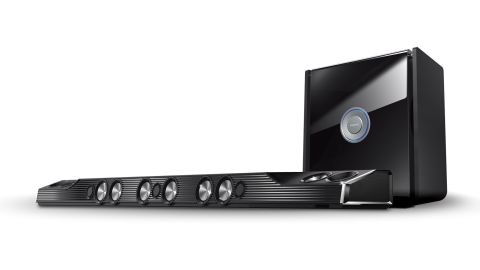 The Creative X-Fi Sonic Carrier is the Rolls-Royce of soundbars. It has dominant performance that commands attention and it carries a price to match. It’s probably the best performing soundbar on the market, thanks to Creative’s phenomenal DSP and 15.2 speaker array, but its user interface and general usability could be a bit better.

The Creative X-Fi Sonic Carrier is the Rolls-Royce of soundbars. It features 17 speakers set in an 11.2.4-channel or 15.2-channel configuration that can put out well over 110 dB of sound and support for Dolby Atmos right out of the box.

Put simply, if there’s an audiophile in your life who still doesn’t believe that soundbars can sound just as good as a surround sound system, this is where you need to point them.

But specs can only do so much justice to this soundbar. The icing on the proverbial cake is Creative’s exceptional DSP (Digital Signal Processing) that transforms stereo sound into an immersive orchestra of 24-bit 192kHz music and object-based movie audio.

The technology is called SuperWide X-Fi and it provides the experience of true surround sound without any additional speakers. It can be disabled if you’re interested in maintaining a pure stereo sound for your music, but for games and movies, SuperWide X-Fi is the definition of home cinema sound.

All that said, this level of scintillating audio performance doesn’t come cheap: the MSRP of the Creative X-Fi Sonic Carrier is $3,999 (around £2,870, AU$5,295). You’ll also have to deal with a rather small selection of apps that come built onto Creative’s custom Android TV and the soundbar’s directional sound. These are ultimately minor problems for what is easily one of the best soundbars in existence, but they are ones worth calling attention to.

If you aren’t put off by the price tag, and the sounds of a custom Android TV OS doesn’t strike fear into your heart, you will be treated to some spectacular-sounding audio that will transform any room of your home into the cinema/dance club you’ve always dreamed of owning.

The Creative Sonic Carrier isn’t cheap, obviously. But in return for your investment you get a fairly robust piece of kit.

The soundbar itself weighs in 35.3 pounds and the accompanying single-unit subwoofer weighs a back-breaking 59.5 pounds. It’s not the kind of thing you’d want to carry from room-to-room, but could be a manageable solution if you’re a traveling DJ or electronic musician and you only need to fill a room with sound for the night.

But if you’re afraid that the soundbar might block your TV’s IR sensor, don’t be. Creative includes an IR receiver in the box and the soundbar supports a 2.0a HDMI-out with ARC.

Speaking of HDMI, the Creative Sonic Carrier comes equipped with four HDMI 2.0a ports with HDCP 2.2 - three in the back of the soundbar and one in the front. Also along the back of the bar you can find an auxiliary 3.5mm jack, two ¼” microphone connectors, two USB 2.0 type A connector for USB flash drives and HDDs, one SD card slot and three MicroSD card slots alongside two optical audio Toslink inputs.

Better than all of that, though, is the soundbar’s support for wireless audio - which currently includes Bluetooth version 4.1 and aptX, aptX Low Latency, AAC and SBC codecs. There are still some missing codecs here - LDAC and aptX HD are two that spring to mind - but for the most part all your bases are covered.

Of course, you won’t need to use any Bluetooth codec should you decide to stream music or video from any number of the soundbar’s built-in streaming services that include Spotify and Tidal, plus YouTube, Netflix, Vudu and HBO Go. There’s room for improvement here, sure, but again, as a package it feels 95% complete.

As you might’ve expected, there’s also an accompanying app to go with it.

Setup and the Sonic Carrier app

If you’re a home entertainment enthusiast, there’s probably one question on your mind right now: Why buy a $4,000 soundbar when you could buy a floorstanding speaker setup for half the price? The answer is simple: setup is just too damn easy.

If you’re an audio enthusiast, speaker cables don’t scare you. You’ve measured, cut and capped dozens of spools of 12-gauge wire in your day and the only aspect of an Atmos speaker setup that scares you is the upgraded AVR.

But look, not everyone is an AV enthusiast - or at least, an AV enthusiast with the skills and knowledge base necessary to go through the work of picking out an AVR, two fronts, a mid, two sides, four height and two subwoofers, plus enough speaker wire and end-plugs to wire the whole thing together. And for those folks, the convenience of a soundbar will always be a siren call.

To that end, you can have the Sonic Carrier unboxed and bumping beats in less than 30 minutes’ time if you have all the HDMI cables handy. Pairing the subwoofer to the soundbar is done wirelessly through the soundbar’s built-in OS and included Bluetooth keyboard and remote - while a bit fragile and easy to misplace - really help control the action.

If you’re a more futuristic sort, you can download the Sonic Carrier app on iOS and Android which allows you to calibrate the soundbar using your phone or tablet’s built-in microphone, and control playback settings.

Overall the app is a bit barebones, but it’s ultra-fast and unlikely to ruffle any feathers.

But none of this would matter if sound wasn’t pristine, energising and downright enjoyable to listen to. Thankfully, it’s absolutely all those things.

Even at its lowest volume levels the Sonic Carrier pumps out near-perfect audio. We had ours set to around the 20 volume mark, and that was plenty loud to fill the entire medium-sized room with sound. Cranked up to the 30 mark, the walls began to shake. Any more than that, and we were afraid that the neighbors might file a noise complaint but it was truly the closest we’ve ever come to having club-level audio in our home.

Speaking of clubs, the Sonic Carrier’s biggest strength is in its music reproduction. Songs absolutely shimmer in the hands of this soundbar. Standing in front of the Sonic Carrier, highs and mids come through with excellent clarity and energy, while wall-shaking bass provides a controlled, powerful rhythm.

The Sonic Carrier is versatile enough to handle songs like Foo Fighter’s acoustic version of Everlong in a way where you can hear Grohl’s fingers slide along the fretboard while being dynamic enough to do justice to Macklemore’s Glorious with its driving melody and walloping bass drum. Both sound genres sound great, and both songs will blow you out of the water.

Transitioning to films takes a minute - as it’s best if you go into the settings to change the DSP to Creative’s movie mode - but your effort is well-rewarded: movies and shows sound superb on the Sonic Carrier. Specifically, what you’ll hear is an uptick in the bass and mids, emphasizing explosions, car chases and, most importantly, dialog. That being said, if you need even more mid tones, you can head into the equalizer to custom calibrate each setting.

Finally, for gamers, the soundbar passes through 4K/60 HDR signal from the HDMI ports to the TV itself, all-the-while decoding audio using Dolby Atmos, Dolby TrueHD or Dolby Digital Plus encoding. For games that support Atmos, like Gears of War 4 or Assassin’s Creed Origins on Xbox One, this means absolutely immersive audio that utilize the Carrier’s height channels as well as its standard surround sound drivers.

A key component to the Sonic Carrier’s sonic performance is its support for object-based surround sound for TV shows and movies, 24-bit 192kHz Hi-Res Audio upscaling for music and SuperWide X-Fi DSP for just about everything else. These technologies provide the backbone for near-flawless audio reproduction across the board, in every circumstance.

The only problem that we had with the sound, and it’s minor, is that it was directional. Move off-axis too far in any direction and suddenly that dance club-esque atmosphere drops down to a comparatively tame dull roar. This won’t be a problem for most folks - as the soundbar will be placed directly in front of the TV and viewed head-on, but if you plan on hosting a movie night some of the audience is sitting a bit off-axis know that they might not be hearing the soundbar at its peak potential.

Ignoring the few minor quirks, it’s hard to speak enthusiastically enough about the Sonic Carrier’s sound performance and the enormity of the engineering that went into designing this soundbar. It’s simple to set up, sounds amazing and supports 95% of the top-tier codecs and audio formats on the market. There’s room for improvement, sure, but there’s not a soundbar on the market that can touch what Creative’s done with the Sonic Carrier.

All that said, is $4,000 too much to spend on a soundbar - even one as genuinely awesome as the Creative X-Fi Sonic Carrier? Probably. But is a few grand worth spending to turn your basement or garage into a club / near-cinema-quality home theater? Yeah. It is.