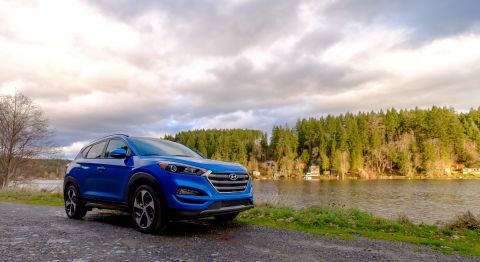 If it didn't have the Hyundai badge, it would be easy to mistake the Tuscon for a luxury crossover that would fit in with Audi and Lexus's lot, but it falls short on technology.

Update: Review and score updated to reflect the recent software update that adds Android Auto and Apple CarPlay to the Tucson with navigation.

Station wagons, or estates and touring's for those on the eastern side of the Atlantic, were once a staple for the American car buyer. It was the ultimate family vehicle that was comfortable with tons of space. Americans ditched the station wagon for the minivan and later the sport utility vehicle (SUV). The last decade paved way for a new type of vehicle: the crossover utility vehicle (CUV).

While it has a fancy new name, the CUV is the result of car buyers circling back to the station wagon, regardless of whether they'd admit it. Theoretically, the CUV combines the tall seating position of a sport utility vehicle (SUV) with the comfort, drivability and fuel economy of a car. In reality, it's a hatchback or station wagon with extra ground clearance.

Regardless of what you call it, Hyundai has an all-new Tucson compact CUV that looks simple but quite upscale. Hyundai sent me a gorgeous Caribbean blue 2016 Tucson Limited AWD, loaded with the Ultimate Package that retails for $34,945 (£30,930 for the similarly-equipped Tucson Premium SE 1.6 T-GDI Petrol 4WD DCT automatic or AU$43,490 for the Tucson Highlander 1.6 T-GDI petrol AWD) to test for a week.

I dig the Tucson's new look: the front-end has a mean grin to it, though it's not too aggressive. The car has an understated look that is more typical of luxury cars than the mainstream ones it competes with. Hyundai also reserved the use of chrome to some parts of the grille and door handles, which I appreciate deeply – I despise chrome accents on cars.

Step inside the new Tuscon, and you're treated to soft-touch materials all over that give the car a feel of luxury. The heavily-insulated doors open and close with a heavy "thunk" that's typically associated with premium cars. Grab the leather-wrapped steering wheel, and your hands feel at home with the integrated thumb grips.

Look forward, and you're treated to a pair of analog gauges for the tachometer, engine coolant temperature, speedometer and fuel. Sandwiched between the gauges is a 4.2-inch, multi-function LCD that displays your trip, fuel economy, driver assist, turn-by-turn navigation and music information. Hyundai provides access to settings for driver assists and vehicle conveniences, like how long the lights stay on after you get out of the car, sensitivity of the automatic headlamps, enable or disable the smart trunk and more, via the small LCD.

Everything looks and feels good initially, but then you reach down for the shifter and notice the lower center console is made of hard, cheap plastics with fake stitching that doesn't look premium at all.

You move your knee around a little and notice there's a padded vinyl cover for your right knee. Most of the interior of the Tucson looks luxe – until you reach for the center console. It's understandable to use cheaper plastics on the lower parts of the dash, but the transition from a nicely-appointed, padded knee rest to the cheapest plastic of the interior doesn't match well in my eyes.

I'd rather Hyundai forgo the padded knee rests for a higher-quality center console that matches the rest of the interior, but I could be nitpicking. The Tucson as tested is not a cheap car, and the padded knee rest feels like slapping a Band-Aid to cover up bigger problems.

Nevertheless, the Tucson has a well-laid out, driver-focused interior. The center stack, where the infotainment display and climate controls reside, has a slight tilt towards the driver. There's a large, powered panoramic sunroof that occupies most of the roof and brightens up the all-black interior. If you find the sunlight annoying, there's a powered sunshade that covers the entire glass panel.

Hyundai announced their Display Audio infotainment system nearly a year ago for its first public demo at CES 2015. The 2016 Tucson is the first Hyundai to integrate the new system.

Gone from Display Audio is the CD player, finally. I haven't purchased a CD since the early days of in-car iPod connectivity, with the Alpine KCA-420i, so I won't lose any sleep over it.

Mounted at the top of the center stack is an 8-inch LCD with a resolution of 800 x 480. It's not high-DPI, like your smartphone, but you're not spending a long amount of time staring at the screen from a few inches away, either. Mounted directly below the display are clearly-labeled buttons that provide direct access to frequently used functions and knobs, like volume and radio tuning or music file navigation.

As someone that prefers tactile feedback while driving, I appreciate the buttons. It might not look as sleek as a completely black panel of capacitive touch buttons, or as simple as touchscreen-only designs, but function is always more important than form to me.

The entire user interface is familiar and identical to other Hyundai and Kia vehicles, including the Optima. There's a split home screen that shows navigation and audio functions side-by-side. I found myself using the SiriusXM interface most of the time.

Display Audio features HD Radio, SiriusXM, USB audio, Pandora connectivity and iPhone or iPod support. The SiriusXM tuner supports time-shifting for stations set to the first preset, so you can start over or replay Taylor Swift tracks over and over again to your heart's content.

There's one USB port in the center console with a large cubby that fits phablets, like my Nexus 6, with room to spare. The USB port can be used for standard flash drives with MP3s on it or your phone. I measured power output on the USB port using a Drok USB power meter at 0.8-amps with my Nexus 6 plugged in and 0.5-amps with my iPhone 6S, so there's plenty of power to charge your devices, but it won't charge nearly as fast as a dedicated 2.1-amp or QuickCharge-compatible chargers.

Navigating flash drives is straightforward. You can navigate by track information, like artist, album, song or song title, but I prefer to select my music by folder. Display Audio maintains the folder structure of your flash drive, so if you're particular about how you organize your music folders, there won't be any annoying surprises here.

Pandora connectivity is available for Android and iPhones. Android relies on Bluetooth audio streaming, while iOS requires a wired USB connection. Shockingly, Pandora via Bluetooth with my Nexus 6 sounded just as rich as the iPhone 6S's wired connection, and a significant quality upgrade compared to the AVN 4.0-based system in the Kia Optima and Hyundai Sonata, which had audible compression artifacts and muddy bass.

Hyundai has not confirmed what changed with Display Audio to drastically improve the audio quality. I predict Hyundai upgraded the Bluetooth stack used in Display Audio to support the AAC audio codec. Your typical advanced audio distribution profile (A2DP) audio implementation only requires support for low complexity subband coding (SBC), which focuses on bandwidth efficiency and not sound quality.

A2DP supports additional codecs, like MP3 and AAC, but infotainment systems don't typically support receiving the optional codecs. Theoretically, if the receiver supports MP3 or AAC decoding, then there's virtually no audio quality difference between wired and wireless connections. Pandora streams are encoded in AAC at bitrates up to 192kbps (Pandora One), so if it can pass the raw AAC signal to the car and let the infotainment system decode it, audio quality is limited to the digital-analog-converters (DAC) in the car.

The typical Bluetooth audio streaming that relies on SBC requires the audio source to be decoded, re-encoded to SBC, sent to the receiver, then decoded again, which results in awful sound quality that rivals SiriusXM for poor compression and low bit rates.

Navigation in the Tucson works without any surprises. You can input addresses or search POIs. The maps aren't as fancy and 3D as luxury vehicles, but it all does the job. I will commend Hyundai for not employing safety lockouts that prevent using the navigation functions when the car is moving. There's a disclaimer that pops up every time the car starts that asks you to agree, but it goes away after a short amount of time.

SiriusXM NavTraffic is supported in the US and requires a $3.99 per month fee, while International versions of the car use radio data via the traffic message channel (TNC). I'm not fond of SiriusXM NavTraffic at all. The subscription is too much to pay for something that's offered for free on my smartphone that's always with me. There's also the issue in which I can spot road traffic and SiriusXM will not report anything.

Bluetooth is available for smartphone pairing. I didn't encounter any issues with my Nexus 6 or iPhone 6S when trying to pair. Both devices paired, downloaded contacts and call history without any issues. There isn't support for in-car text messaging, but you're better off using Siri or Google voice recognition for hands-free text replies.

Voice commands are available, but the system is slow to comprehend, inaccurate and doesn't work very well, like most offline, automotive voice recognition systems. I've yet to experience in-car voice recognition that can rival Siri or Google Now, but the Tucson doesn't support Apple CarPlay or Android Auto yet.

Siri Eyes-Free is available when paired with a compatible iPhone. With Eyes-Free, Siri can be triggered by holding down the voice recognition button on the steering wheel. I found myself defaulting to using my iPhone in the Tucson, because of Siri's inherent in-car speech recognition abilities.

When Hyundai announced Display Audio and demonstrated development boxes at CES, there was a focus on Android Auto and CarPlay connectivity. The 2016 Tucson received Android Auto and Apple CarPlay support via software update in May.

The implementation in the Tucson is the same as the 2017 Elantra and works just as well, just plug in your iOS or Android smartphone and follow the prompts. Hyundai lets you use the native navigation and Android Auto or Apple CarPlay seamlessly, so you can choose whichever interface you prefer.