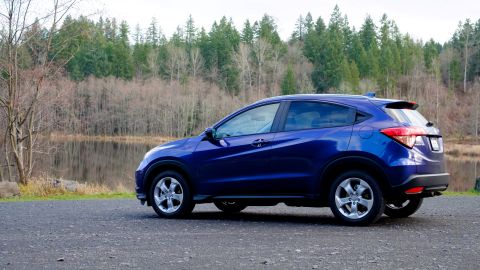 Honda's HR-V is a functional, spacious crossover with fun driving dynamics that fails to deliver on tech – even with two USB ports and Siri Eyes Free support.

Crossover utility vehicles (CUVs) are here to stay, so it's time we embrace the hatchback on stilts. Honda's latest attempt to attract buyers that desire a small car with high seating position, coupled with car-like driving dynamics and fuel economy, resulted in the all-new 2016 HR-V. Starting with the Honda Fit platform, the HR-V adds 9.1 inches of length, 1.7 inches of ground clearance and optional all-wheel drive (AWD) to transform a mundane hatchback into a CUV.

Honda sent me a fully-loaded HR-V EX-L Navi with an MSRP of $26,740 for a week to test out every aspect of the car, from drivability to infotainment. (It's £25,425 for the similar EX, but the UK model has a smaller 1.5-liter motor and more driver assist technologies, and AU$36,610 for the equivalent VTi-L trim.)

Styling of the HR-V is very conservative and not something that attracts attention or excitement, there's no denying that it looks like what you would expect from a Honda, though. The front end is tame, with reflector-housing halogen headlights and Honda's signature, V-shaped grille, a distinguishing feature of Honda's entire model lineup. There are no LED daytime running lights (DRL) that other automakers install to give cars a modern look.

I find the lack of high-intensity discharge (HID), or projector lens halogens at a minimum, disappointing because the reflector-housing halogens aren't very bright. The HR-V's nearest competitor, the Mazda CX-3 Grand Touring, features bright LED headlights at a comparable price. Things start to look better when you move around back, where bright LED brake lights and high-mount brake lights are employed.

The Deep Ocean Pearl paint on the tested HR-V is a gorgeous color. It appears blue or purple, depending on the available light and angle. I'm usually not a fan of the color purple but the HR-V wears it well.

Reach for the front door handle with the key fob in your pocket, and the respective door unlocks, thanks to a proximity-sensing door handle and the HR-V's passive keyless entry feature. There's a button on the door handle to press to lock the door if you're exiting the car, so you never have to take the keys out of your pocket or purse.

Step into the driver's seat, and you're treated to plenty of vinyl-covered soft-touch surfaces. There's some hard plastic surfaces on the lower part of the dashboard, but Honda does a great job dressing up frequently seen and touched spots with vinyl.

When the car is off, the gauges, infotainment display and climate controls appear as completely black panels. Push the red start button, and everything lights up and becomes functional.

Honda sticks to analog gauges for the tachometer and speedometer, which I prefer because they respond quicker than LCD displays. A low-fi information display shows your fuel economy, trip information, fuel gauge, outdoor temperature and time. It's not as colorful or functional as an LCD display but suits the HR-V's black and white theme well.

My biggest annoyance with the interior is the climate control panel. It's a capacitive touch panel that looks great when the car is off, and even responds well to my touch. However, the lack of physical feedback annoys me because it's hard to change the climate control without looking down at the controls. You cannot rely on muscle memory since there's no physical response or haptic feedback.

Fortunately, the car has automatic climate control that you can set and forget. It's not an ideal input method, but if you don't adjust the climate control too often (like me), it's only a minor annoyance and not a deal breaker.

The deal breaker for me is the seats in the HR-V. There's plenty of side bolster for the top and bottom cushions and the back support is curved to contour to my back, despite the lack of lumbar support. But the seat bottoms are very flat, wide and hard where my bum sits. My 5'7" and 195-pound frame doesn't have enough cushion to fill the seat bottom and causes my lower back to hurt immensely after an hour of driving.

Honda really likes capacitive touch technology, as the infotainment system is devoid of any physical buttons. Instead, capacitive touch buttons to the left of the screen are available for home, menu and back functions, similar to an Android smartphone. The buttons don't bother me too much, as I prefer using the steering wheel controls, which are traditional buttons.

The volume control is particularly annoying with the capacitive touch buttons and steering wheel controls. I prefer having a volume knob that I can quickly turn to bring the volume up or down. The HR-V also lacks a mute button too, which makes ordering a McRib at the drive-through window at McDonald's and waiting for my order a little more tedious.

Basic features of the infotainment system are as expected, with USB connectivity, SiriusXM, HD Radio, Pandora and Aha Internet radio. Honda provides two USB ports to connect your smartphone and a USB flash drive at the same time. An HDMI input is available, but only usable via HondaLink or when the car is in park.

Navigating USB flash drives isn't really ideal with the purely touch interface. You can navigate music by track data or folder layout, but if you load a large flash drive full of music, it's a slow process of scrolling through all of your music or folders. A knob that could scroll through quickly is my preferred method of input.

SiriusXM and HD Radio capabilities are available. I listened to SiriusXM most of the time, as HD Radio cuts out often where I live. Honda doesn't provide any time-shifting features for SiriusXM, so you can only listen to live music.

Pandora connectivity is available via Bluetooth for Android devices and USB for iOS devices. I tested the feature with my Nexus 6 and iPhone 6S and preferred the audio quality of the wired USB connection. However, the sound system in the HR-V isn't very good, so I'm willing to sacrifice some audio quality for convenience in it.

Smartphone connectivity via Bluetooth is available with your usual phonebook and recent calls. Text messaging is supported, but the functions are extremely limited to reading the messages and issuing quick replies. You're better off replying using your phone's Google Now or Siri voice recognition.

Fortunately, if you pair an iPhone to the HR-V, you can take advantage of Siri. Eyes Free mode is activated by holding down the voice recognition button until you hear the Siri tone to speak. Siri accepts commands through the car's microphone, so you can use all of the functions while keeping your iPhone in your pocket.

Navigation is included on the EX-L Navi, as the trim level suggests. The maps are flat and the user interface resembles the navigation software in the Hyundai Tucson and Kia Optima. There's nothing out of the ordinary with the navigation function, and it had no trouble finding locations. However, Honda employs a lockout that prevents destination or POI input when the car is moving.

When the car is rolling at speeds above a crawling pace, the features are blocked out and unselectable. This is always the case, even if there's a passenger trying to use it. You can use voice recognition when the car is moving, but it's a clunky mess that requires too many commands and corrections to find where I need to go. It's much faster to use Siri Eyes Free or pull out my phone to find my destination, which defeats the purpose of having a safety lockout to prevent distracted driving.

Honda HD Digital Traffic provides subscription-free access to traffic data for popular highways, but like most traffic services, you're better off learning the traffic conditions of your route. It relies on HD Radio technology that promises quicker updates, but you're still better off using Google Now to predict travel times and traffic.

Features aside, the HR-V's infotainment system is terrible. The menu transition effects stutter, which doesn't help the perception of speed and responsiveness. The menu layouts are intuitive for technically-inclined users, but the average person may not realize the tab in the middle of the right side of the display is a pressable onscreen button, which expands the function of the audio source or phone features.

Selecting the audio source from the infotainment screen is very obvious, but only to the savviest tech users. There's an onscreen button labeled "SOURCE," but it shows what's playing, so less techy drivers may not think to press it to change the source. Honda's decision to give up physical buttons for a cleaner and simpler dash layout is more visually appealing, but not very intuitive to those that may struggle to use a smartphone.

Overall, it's an infotainment system you learn to put up with, rather than enjoy using. The worse part is the recently released Honda Civic, refreshed Accord and all-new Pilot have the latest generation Android-based infotainment system, which is really strong, from my experience.

The HR-V's last infotainment feature is HondaLink, a supposedly next generation connectivity method for iOS users. The system relies on an iPhone connected to the infotainment system via the Lightning connector and HDMI video input.

You need to shell out $100 (HondaLink is only available in the US) for the official Honda connection kit, or any other Lightning HDMI output adapter, to take advantage of the feature. Regardless of the adapter you choose, it's still an unnecessary wiring mess that requires an HDMI and Lightning cable connected to the video output dongle.

I wouldn't mind the excessively complex connectivity if it provided useful features, but HondaLink does not provide anything useful. It offers screen-mirroring functionality that's extremely limited to an optional navigation app, Aha radio and iHeartRadio. It hardly seems worth the effort and extra cost for such limited functionality.

To top things off, the HondaLink Navigation app is a separate $59.99 (not available outside of the US) purchase if you want to use smartphone-based navigation. The feature is better touted on the lesser EX trim level, which doesn't have integrated navigation, but I'd prefer integration with the free Google Maps or Apple Maps apps.

Ultimately, I have no idea why anyone thought HondaLink was a good idea or why it exists. Just give us Android Auto and CarPlay support, please.

Next Page Audio and driver assists