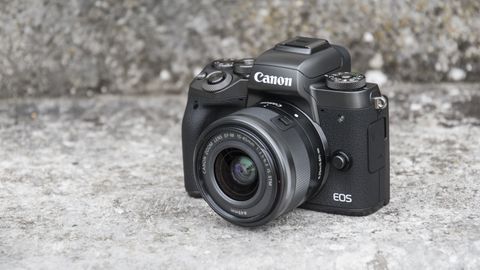 The EOS M5 is Canon's best mirrorless camera yet, and is certainly a very capable piece of kit. The only things really holding it back are the hefty price difference compared to rivals, and a limited lens range.

While Canon has, along with Nikon, long dominated the DSLR market, it has struggled to replicate that success with mirrorless cameras. The EOS M was underwhelming to say the least, with poor autofocus performance, while the EOS M3 and M10 haven't really progressed the range that much.

The arrival of the M5 could shake things up a bit though. Sitting at the top of Canon's (albeit still modest) mirrorless range, the M5 is designed to appeal to experienced users, with Canon hoping it will appeal to current higher-end EOS DSLR users looking for a more portable alternative to their DSLR.

The EOS M5 sports an all-new 24.2MP APS-C CMOS sensor, though its DNA can be traced to the excellent sensor we’ve already seen in the EOS 80D enthusiast DSLR, with a sensitivity range running from 100-25,600.

The original EOS M suffered from a notoriously slow AF system, and while the EOS M3 featured a Hybrid CMOS AF III system that was a noticeable improvement over its predecessor, the EOS M5 takes advantage of Canon's latest sensor technology and uses its now proven Dual Pixel CMOS AF, which has impressed in the past, partnered with its latest DIGIC 7 image processor.

In a first for Canon's mirrorless range, the EOS M5 incorporates a built-in electronic viewfinder with a 2.36-million dot resolution and fast 120fps refresh rate. There’s also a large 3.2-inch tilt-angle display – and what’s really nice to see here is that Canon has implemented touchscreen technology, just as it’s done with the 5D Mark IV.

The screen can be tilted upwards by approximately 85 degrees for waist-level shooting, and downwards by up to 180 degrees should you be ever tempted to take a selfie with your M5. It features the same impressive 1,620,000-dot resolution as we've seen on both the 5D Mark IV and 1D X Mark II.

The EOS M5 is also the most connected Canon camera we've yet seen, with not only Wi-Fi and NFC, but Bluetooth. This allows a low-power, constant connection to be maintained between camera and smart device for what promises to be easy transfer of images between the two.

Perhaps a little surprisingly, given the recent arrival of 4K video on the 5D Mark IV and the increasing prevalence of 4K on rival cameras, the EOS M5 sticks with 1080p video, although it's possible to shoot at up to 60p.

While manufacturers like Fuji, Olympus and Panasonic have steadily built up their lens ranges over the past few years to cover a range of focal lengths, with a decent mix of primes and zooms to suit a range of budgets, Canon’s EF-M lens range currently stands at a paltry seven.

Of these, five are fairly slow variable-aperture zoom lenses, while the other two are primes, the fastest of which is the 22mm f/2 – no nice f/1.4 optics here. Yes, there is the EF-EOS M adapter available, enabling you to use Canon’s huge back catalogue of EF-mount lenses, but putting often chunky lenses on a small body feels a little perverse when the whole point of the M5 is acting as a smaller, more pocketable alternative to an EOS DSLR system.

It’s hard to say whether Canon is waiting to see if the EOS M5 is a success before developing more lenses for it, but having such a limited range of dedicated lenses compared to rivals may be one of the key things that holds back the M5.