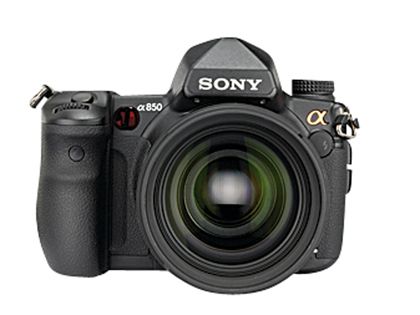 The A850 lacks both movie capture mode and Live view shooting, which has become standard on D-SLrs

A step down from Sony's original A900 full-frame offering, the newer A850 is nevertheless almost identical in most areas, but with a significant price reduction, making it the cheapest full-frame camera on the market.

Compared with the A900, it still boasts the same CMOS sensor, with a class-leading resolution of 24.6Mp and all of the same controls.

The only notable changes are that the memory buffer is smaller and the maximum frame rate is reduced from 5fps to a particularly pedestrian 3fps.

Viewfinder coverage also shrinks to 98%, but that's still on a par with the Canon EOS 5D Mark II and is slightly better than the Nikon D700. The A850 has a clunky design but a good, solid feel based on an aluminium chassis and magnesium alloy shell, with plenty of weatherseals.

Under the skin, dual Bionz image processors team up to tackle the high-resolution output of the sensor, which itself is unique in the group by featuring sensorshift stabilisation.

The so-called SteadyShot Inside system gives a two-stop anti-shake advantage, which isn't a match for the latest four-stop optical stabilisers fitted in many current lenses, but at least it has the bonus of working with any attached lens.

And speaking of lenses, you can also use those designed for smaller sensor cameras, thanks to an APS-C shooting mode, which crops the resolution to a still-useful 11Mp.

The Sony features AF microadjust for fine-tuning autofocus for individual lenses, and autofocus itself is based on a system with nine selectable points plus a further ten 'assist' points.

Like the Canon, only the centre point is a bi-directional cross-type sensor, whereas the Nikon boasts 15 cross-type sensors in its bigger 51-point array. In practice, autofocus proved very accurate in our tests but was quite sluggish locking on to static subjects and struggled to track moving targets, especially compared with the Nikon D700.

There are the usual options of Multi-segment, Centre-weighted and Spot metering, all of which are impressively accurate. Dynamic range gets a boost for tricky lighting conditions thanks to a built-in D-Range Optimizer.

This has off, standard and advanced auto options, along with no less than five individually selectable manual levels. Even so, it can't quite knock Nikon's Active D-Lighting off its perch as the top performer.

Indeed, there can be quite a lot of guesswork involved in deciding which D-Range Optimizer setting to use in any given situation, so it's usually better to shoot in RAW and adjust it afterwards, using the straightforward yet powerful Image Data Converter SR program that Sony gives away with the camera.

In some respects, the A850 is found wanting. Not only is there no movie capture mode, but the Sony also lacks Live View shooting, which has become a standard feature on even basic D-SLRs. Customisation options for shooting settings are a little limited, but at least you get three custom shooting settings, which are easily assigned to the Mode dial.

Sony has also cut back on the size of the top plate LCD, which only gives the barest minimum of information. On the plus side, this makes more room for big, independently placed buttons with plenty of space around them, for direct access to exposure compensation, drive mode, white balance and ISO, all within easy reach of the shutter button.

And even though the top panel LCD is disappointingly small, the so-called Quick Navi menu displayed on the rear LCD is particularly good, even if the LCD itself is overly bright, our review sample needing to be turned down by a couple of notches to give a reasonably accurate display.

Sadly, while the A850 delivers essentially noise-free results at its base sensitivity setting of ISO200, you don't have to push it very far before images start to look grainy. Noise becomes quite noticeable at anything over ISO400, making the Sony a bit of a fair-weather friend, and of relatively limited use as an indoor tool.