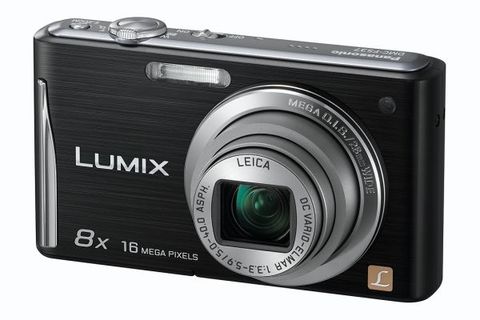 For a camera with an 8x optical zoom lens, the FS37 is impressively compact and light

Those in the market for a well constructed, compact and lightweight camera for taking shots mainly in good light and making reasonably small prints will find the simple sleek design and simple controls of the FS37 suits them just fine

Priced at around £175, Panasonic's Lumix FS37 sits in the middle of Panasonic's digital compact camera range, offering a few more features than basic models, whilst keeping operation simple and straightforward.

For a camera with an 8x optical zoom lens, the FS37 is impressively compact and light, weighing only 159g with the battery and a memory card installed. It is also small enough to be carried about in a shirt pocket or handbag.

A focal range equivalent to 28-224mm on a 35mm camera is covered by the Leica branded optic, providing a useful amount of wide-angle coverage for group shots of people and enough telephoto reach to pull in relatively distant subjects. Panasonic's Mega Optical Image Stabiliser (OIS) is also included, to help iron out any wobbles, which will be especially useful at the telephoto end of the zoom range.

An additional 2x zoom can be added to the range at the touch of a button via digital zoom.

Disappointingly, the ISO range available is quite conservative by modern standards, with the maximum sensitivity being only ISO1600. Saying that, the 16MP resolution is plenty for producing A3 sized prints from images taken in good daylight. Intelligent ISO control also automatically varies the sensitivity used between ISO100 and ISO800, making shooting in changing light a little easier for those who prefer to point and shoot.

The major unique feature of the FS37 is the three inch touch sensitive LCD screen. The touch interface is a resistive type, so a stylus, can be used for increased accuracy. Touch focus and touch shutter modes are included allowing you to take a picture by touching your main subject on the screen.

HD video recording is supported, but only at 720p resolution and at 24fps which is a little disappointing. Many cameras at this price point now offer full 1080p resolution video capture at 30fps, and this higher quality standard seems to be fast becoming the standard.