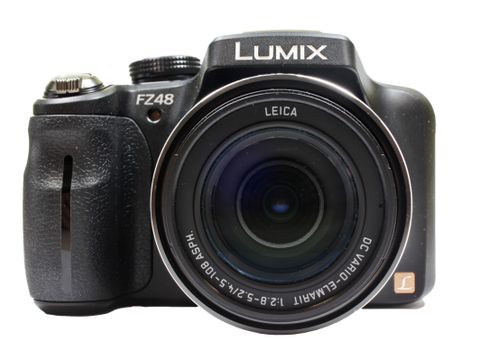 Is the latest addition to the Lumix range a worth successor? Read on to find out.

The low performance at high ISO sensitivies is a shame, as everything else about the camera is well implemented. The build quality and lens are excellent, the control method is intuitive, and there is a vast range of features to keep even experienced photographers happy.

Bridge cameras fill a niche due to the huge zoom ranges that can be achieved when designing a camera around a small sensor, while keeping the camera body relatively compact.

The Panasonic DMC-FZ48 is very similar to the previously released Panasonic FZ45, which currently retails at around £250. It has the same 24x lens, providing an angle of view equivalent to a 25-600mm lens on a 35mm camera and the same 'Sonic Speed AF' system, which promises fast and accurate focusing.

The Panasonic DMC-FZ48 is very similar to the previously released Panasonic FZ45, which currently retails at around £250. It has the same 24x lens, providing an angle of view equivalent to a 25-600mm lens on a 35mm camera and the same 'Sonic Speed AF' system, which promises fast and accurate focusing.

The updated FZ48 retails for around £320, which is competitively priced when compared to direct competition.

The major differences lie in the sensor, which is a modest 12.1 megapixel CCD in the FZ48, while its predecessor sports a 14.1 megapixel sensor.

The logic behind reducing the resolution must be to improve the camera's performance at high ISO sensitivities, although the choice of a CCD sensor over the latest back-illuminated CMOS technology is a little baffling. Supported ISO range settings cover ISO 100 - 1600, with no option for expansion.

The ability to take images in RAW format is also missing from the FZ48 camera, which may be limiting for more experienced photographers who enjoy the flexibility that RAW images offer.

Video recording is also improved in this updated model from the 720p recording offered by its predecessor. The FZ48 outputs 1080p HD footage at up to 25 frames per second in either AVCHD or Motion JPEG formats.

A connection for HDMI output direct to a high definition TV is supplied, and if you're lucky enough to own one of the latest 3D televisions, pictures taken in the 3D photo mode can be displayed in all their depth.

This mode works by taking multiple images as you move the camera in a straight line from left to right. The FZ48 pieces the images together, displaying them in 2D on the 3-inch LCD screen.

If the 24x zoom range supplied isn't enough, extra zoom range can be bought at the expense of resolution. Resolutions that support this feature are labelled with 'EZ' and will provide extra digital zoom until the resolution drops to the level specified by you in the menu.

Optical stabilisation is a necessity with high-zoom cameras such as the DMC-FZ48. Using default settings, the optical image stabilisation does a grand job of ironing out camera movement when shooting stills. The stabilisation and auto focus systems are amongst the most intuitive to use whilst shooting video.

Stabilisation is automatically enabled and the auto focus tries its best to keep up with changing distances, only taking a around a second to adjust to a sudden changes in subject distance. Stereo sound is recorded via the built-in microphone on top of the camera, but unfortunately there's no way to attach an external microphone.

The built-in flash extends roughly one inch above the camera, which should help to reduce red eye when taking images at close distances. The flash doesn't pop up automatically when required - the choice whether to use it or not is left up to you.

Enthusiasts will be pleased to see that manual exposure modes are available alongside the FZ48's huge selection of scene and automatic modes. This makes this camera suited to photographers with a wide range of experience.