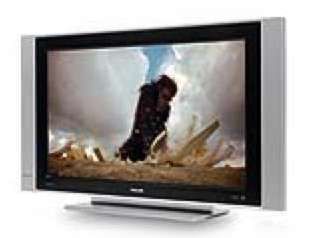 Frankly a remarkable budget offering from a respected brand

The cute-looking Philips 32PF5521D's price grabs your initial attention: £900 shows how inexpensive an HD-ready 32-inch LCD TV from a big brand name can be. Just leave your expectations of a features list as long as your arm and extensive connectivity at the door. Or, maybe not.

This set's connections are unexpectedly impressive for the price. There are two HDMI inputs for a kick off - a breath of futureproofing fresh air for a budget LCD TV. Unfortunately, there isn't a PC VGA input, meaning that using an HDMI is your only option for hooking up your PC: disappointing, but by no means a disaster.

All the other standard-definition connectivity players line up too, as well as a digital audio output - for delivering Freeview's upcoming Dolby Digital sound to an amp - and a common interface slot, flagging up the welcome presence of a digital tuner. The built-in digital tuner has support for Freeview's seven-day electronic programme guide, but this fellow is a little temperamental and rarely intuitive.

Features include noise reduction, great picture-in-picture facilities, Dolby virtual audio processing and a contrast booster: all in all, far more than we were expecting here.

Running our test disc of 2001: A Space Odyssey, left us pleasantly surprised. The overall picture is more than acceptable. Particularly noteworthy is the sharpness: scenes onboard the Discovery spaceship on its voyage to Jupiter are unaccompanied by grain, dot crawl or other artefacts.

We didn't expect Pixel Plus processing on a set costing under £1,000 and we weren't surprised to note its absence here. But, feeding this set some high-definition Planet Earth material, the sharpness was abundant again. Every water reflection and textures of the snow-laden landscapes were captured with clarity and detail.

Black is the new black

Unexpectedly, this Philips dishes out some impressive black levels too, lending the standard-definition space sequences of 2001 and the high-definition night action of Planet Earth real gravitas and believability.

Colours are powerful too and there's little motion smearing. In a perfect world, there would be more greyscale gradiation and darker colours wouldn't be at the mercy of occasional green tinges. But, we can't nit-pick a 32-inch LCD TV that costs just £900.

The 32PF5521D puts in a more than acceptable audio performance as well, matching its better than anticipated picture action.

The soundstage is wide and clear and there's a good attempt at bass injection: the soundtrack of 2001 has a larger-than-life quality that matches the film's colossal imagery, and dialogue is crisp and clear too.

Trebles only become harsh under extreme circumstances (like with the high frequencies involved in the scene where the astronauts visit the Monolith that's been uncovered from the surface of the moon), but, generally, this set's speakers put in a good performance.

This Philips was never going to romp to victory. We're just amazed that Philips has managed to pull off the tricky 'not rubbish' label for a budget LCD with such aplomb.