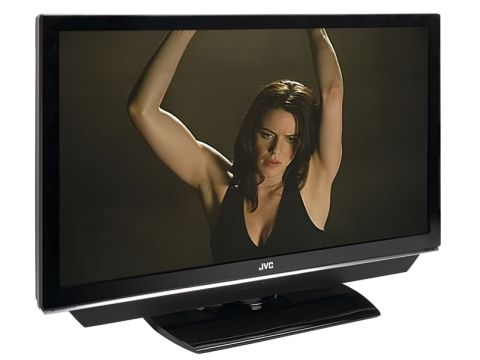 Every new generation of flatscreen TVs brings with it some new must-have gizmo. And for the current generation, that gizmo is 100Hz.

Originally used in cathode ray tube TVs to tackle flickering images, 100Hz doubles the refresh rate of PAL signals - a trick that could reduce the problems LCDs have with rendering moving objects.

Despite its promise, the pictures we've seen on 100Hz LCD TV have dramatically varied in quality, with some 100Hz engines making pictures worse rather than better. So here's hoping JVC's debut 100Hz TV is not one of these.

The set gets off to a good start with some impressive looks. The main gloss-black bezel is impressively slim and beautifully finished, while the speaker section along the bottom has been angled in at the edges to contrast strikingly with the TV above it.

Connectivity is first rate, not least because the TV has three version 1.3 HDMIs, all CEC-compatible, which enable you to control an entire AV setup using the TV's remote. But also present are PC and component video jacks, a common interface for the digital tuner, and an optical digital audio output for sending multichannel audio to an AV receiver.

The 100Hz system we talked about is just one part of a much bigger image processing system on the 42DV8BJ, most of which resides under the umbrella of DynaPix HD.

Included within DynaPix is JVC's impressive DIST scaling engine, for enhanced scaling of standard-definition sources to the panel's resolution, plus tools for boosting contrast, and colour toning and saturation.

The resolution is 1920 x 1080 pixels, making the screen a perfect match for the UK's hi-def TV sources.

While all the specifications and features we've considered so far seem promising, there is one that's worrying: the claimed contrast ratio of 1000:1. This is low compared to figures quoted by rivals, and raises early concerns about the 42DV8BJ's black levels. However, it's possible that JVC is just being honest with its specifications - quoted figures are notoriously unreliable!

A trawl through the 42DV8BJ's onscreen menus uncovers one or two further interesting bits and pieces. Colour management, picture management and Smart Picture options all try to optimise different elements of the picture; there's an MPEG noise reduction circuit for smoothing out blocking from low-quality digital broadcasts; and finally there's a crucial 'Full Native' setting that removes overscanning from what you're watching, so that hi-def sources are displayed pixel-for-pixel on the screen's 1920 x 1080 panel.

The 42DV8BJ's 100Hz talents really do the business. For instance, as Captain Jack sword fights with Barbossa in the treasure cavern in our Blu-ray disc of Pirates of the Caribbean, both the general motion of the characters and the whirling of their swords and arms seem cleaner, sharper and smoother than with non-100Hz LCDs.

The 100Hz difference can be appreciated with standard-def sources too, particularly in the way people's faces move without the customary lag.

The 100Hz impact is not as overt as on some rival sets, most notably Sharp's. But crucially while they might be less aggressive, the 42DV8BJ's 100Hz pictures have far fewer shimmering and twitching artefacts than seen on Sharp's 100Hz TVs.

The set also produces very bright pictures packed with richly saturated colour tones, and produces a good sense of the extra detail in hi-def sources without over-exaggerating them to the point where the images look gritty or noisy.

However, there are three significant weaknesses to report. One of these, as we'd feared, are the set's black levels. Dark scenes in Pirates..., such as the Black Pearl's nighttime assault on the fort, look somewhat grey and flat versus the best 42in flatscreens, especially plasmas.

Gripe two is the drastic reduction in contrast and colour saturation when the TV is watched off-axis - even from just 30-40°.

Our final niggle with the 42DV8BJ is that it's really not a great lover of standard-def, leaving it often looking softer than we'd like.

Unlike its pictures, the 42DV8BJ's audio is beyond reproach. The set carries a Maxx Audio processing engine which, if set to its Mid level, delivers a soundstage of really exceptional frequency range, width and clarity - all with only the rarest trace of distortion. Excellent.

Despite its various picture flaws, the 42DV8BJ is not a bad TV. In fact, if you're sat right in front of it and are feeding it bright hi-def, it's a very good one, with possibly the best-judged 100Hz engine around. But a little better black level response and better viewing angles would be needed before we could upgrade our rating to excellent.