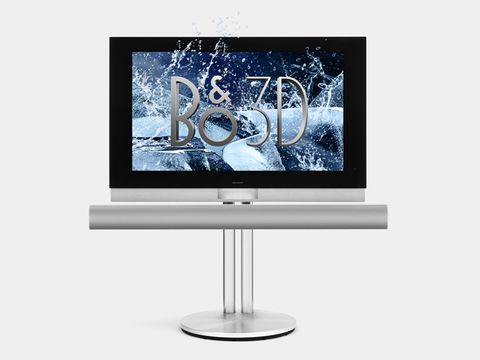 Notwithstanding some prototypes and product showcases from the likes of Sony, Toshiba and Sharp, the flatscreen TV with built-in Blu-ray player has yet to really emerge as a genre. Until now, that is.

Trust Bang & Olufsen. With a money-no-object approach that's almost unique in the world of flatscreen televisions, the latest incarnation of its BeoVision 7-40 has a built-in Blu-ray player that, naturally, can also handle 3D discs.

Interestingly, there has been no jump to the cheaper passive 3D system; it's active shutter all the way for Bang & Olufsen. If that means batteries and relatively heavy 3D specs, don't fret - a lot more power and cash is needed for the Bang & Olufsen BeoVision 7-40 to perform at its best.

The choices for blinging up your Bang & Olufsen BeoVision 7-40 are initially confusing, with several options for both audio and motorised stand. Yup, the TV moves at the touch of a button. This is useful if you have it in an alcove, or your sofa is set up to please the shape of the room rather than the aspect of the TV, but hardly essential stuff.

If you're set on swinging, options include a low or high floor stand, a table stand, or a wall bracket that swivels.

The most popular setup comprises a Bang & Olufsen BeoVision 7-40 with a motorised floor stand, a Beo6 touchscreen remote control, and a BeoLab 7.2 speaker (which sells for £2,700 alone) that can act as either a stereo soundbar or as a mono centre speaker in a surround sound setup.

That array is ideal for standalone use, but if you already have four surround sound speakers, consider instead fitting the BeoVision 7-40 with a BeoLab 7.4 mono centre speaker.

The real beauty of Bang & Olufsen TVs are that very few are sold, so any example is fairly unique.

The brand has taken that a step further here by offering complete customisation of colours on this TV's central column. You can stick with silver or add flashes of black, grey, blue, yellow or red. Either way, build quality is peerless, as you'd expect for this kind of money.

In terms of design, the Bang & Olufsen BeoVision 7-40 isn't particularly slim, at 174 mm, although the explanation for that is the built-in Blu-ray player and surround sound decoder.

All can be customised, colour-wise, to have a black or white reverse. At 64mm, these are the brand's slimmest screens.

The latest B&O TV is the 65-inch BeoVision 12-65 (£16,990), a plasma monitor that's designed only for wall-mounting, and whose integrated (but sleek, and very long) aluminium speaker-bar can act as a centre speaker. That speaker and integrated BeoSystem 3 processor replaces a separate AV receiver in a surround sound setup with the made-to-match BeoLab 12 speakers (£3,800 per pair).

And that's exactly what the flagship freestanding BeoVision 7-40 before us is designed to do, albeit on a much smaller scale, from its own BeoSystem 3-adorned chassis.