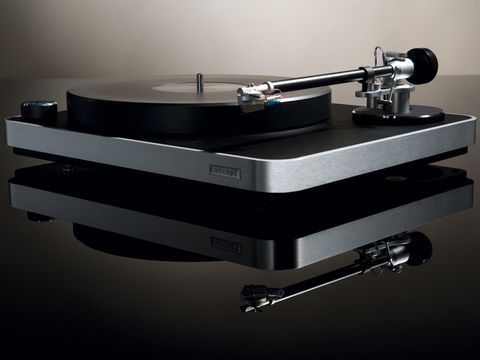 Clearaudio's impressive range of turntables is, to the best of our knowledge, just about the broadest on the planet, stretching downwards from the delightfully over-the-top 'Statement'.

The company doesn't compete with the Regas and Pro-Jects of this world in the budget arena, but the new Concept model puts Clearaudio within reach of more analogue-lovers than ever, bringing the price of entry down significantly.

Predictably, with a name like that, there's plenty of piffle in the literature about how this model is a whole new design, sorry, concept – but fair's fair, it is in fact genuinely novel in some ways.

The basic outline has a particle-board chassis, plastic platter, DC motor and pivoted arm. Differences from the norm are most obvious in the arm, which has a magnetic bearing, an ingenious arrangement that functions pretty much as a unipivot but with better stability and handling qualities than those notoriously fussy devices usually provide. It's also effectively friction-free.

It's actually very simple, relying on a pair of very strong magnets: one is fixed to the top of the arm tube, the other to the top of the bearing yoke and they hold the arm up. It is prevented from jamming itself against the top magnet by a tie wire fixed below, which also transmits the anti-skating force.

The chassis is also distinctive, though less obviously so. Particleboard (MDF etc.) components on LP players are notorious for adding their own resonance unless carefully treated.

Clearaudio has addressed that with damping measures including the aluminium trim, which apparently plays a significant part – whatever the details, it's certainly very much better damped than most of its kind, as is evident from the simplest test of tapping it in a few places.

Another feature that is unusual, possibly even unprecedented in a high-quality turntable, is that the Concept is ready to play discs straight out of the box. Well, all right, you have to put the platter in place and plug in the power supply, but the cartridge is fitted and aligned and even the tracking force is preset.

The arm and cartridge are Clearaudio's own, of course, the latter a moving magnet design, but if you prefer not to use them you can replace either.

You can also adjust all the usual parameters – offset and overhang, VTA, tracking force, anti-skating – but the clever part is that you don't need to. A spirit level is provided so that the user can adjust the three spiked feet to set the deck level.

Drive is from a small DC motor, the sort of thing one used to find in cassette decks (remember them?), which operates via a flat belt.

The motor is resiliently mounted: Clearaudio claims it's 'completely decoupled' which is clearly an overstatement, but the small amount of noise it produces is adequately suppressed by the decoupling.

In addition to the usual 33 and 45rpm speeds, 78 is available for those who collect shellac as well as vinyl – you'll ideally need to change the cartridge as no LP stylus ever sounds great playing the relatively cavernous grooves of shellac discs, but it's a useful option to have.

The power supply is a tiny plug-top switch-mode affair and while ultra-purists may wince at that thought, it's effectively free of hum fields and both it and its associated wiring are a good long distance from the sensitive signal wiring in and around the arm. There's also no electrical path (not even an earth link) between it and the audio.

Only one feature seems to us to be missing – a lid. It may seem a small detail, but a lid both reduces acoustic feedback from the loudspeakers to the deck, and keeps dust off, and no LP collector will need reminding what a pernicious enemy dust can be.

That apart, this is a very nicely turned-out deck, attractively finished and presented. We've never had cause to query the general standard of fit and finish from Clearaudio; just about the worst that could be said is that the surfaces show dust and fingerprints, but then so do wine glasses, fine furniture and so many other things.

Anyway, this deck has more matt and less shiny surfaces than many and is quite forgiving in that regard. We can't comment on the accuracy of settings as supplied, but attention to detail certainly reflects the manufacturer's usual high standards. We were particularly impressed with the bearing, which has an admirable combination of low friction and low play.