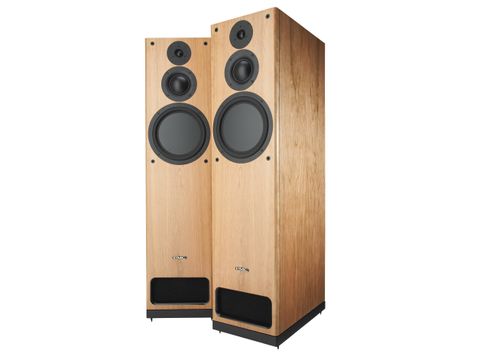 Alongside PMCs popular FB1 and OB1 floorstanders, the company also produces a range of rather more substantial designs that are derived from the models it develops for the 'pro' audio industry.

The latter are mostly actively driven types with amplification made by Canuck power meisters Bryston, customised to PMC's specification.

On a recent visit to the Metropolis studios in Chiswick, we got to hear a stacked pair of PMC BB5s, a combination of a bass cabinet with a 380mm driver under a three-way, full-range cab with the same bass unit again, plus a midrange dome and big 34mm tweeter. The whole ensemble stands over two metres high and is backed up by 2,100 watts per channel.

Fortunately, the mastering engineer using them was a sensible chap and wasn't out to impress us with SPLs. Instead, he played a variety of recent projects and explained that the speakers frequently caused problems with clients who had not heard their work properly before because of lesser quality monitoring in the studio. The speaker opens the window too wide for many recordings. This is the gene pool from which the new EB1 has spawned.

While it is a cheeky little speaker by the BB5's standards, it is still huskier than your average floorstander. Having said that, it's attractively slim for something carrying a 250mm bass driver. As a design, it derives from the IB1, which has the same drive units, but comes in a cabinet that is 3.4cm wider but only 74cm high.

As it's a standmount it ends up being a similar height to the EB1 in practice, but is somewhat inelegant by comparison. There was a time when the accommodating other half would put up with such a thing in the living room but since Grand Designs and the like arrived on our screens, loudspeakers have had to shrink or get a lot sexier to claim their piece of domestic real estate.

The EB1 is still not a compact speaker by any stretch, but it is very nicely put together and looks great in a walnut or indeed the cherry veneer as tested here.

As with all of PMC's designs, the cabinet uses transmission line loading rather than the conventional reflex porting. In the case of the EB1 we have what the company calls an ATL or advanced transmission line.

Advanced being a description for the way that PMC uses a combination of foams that it developed with bed specialist Relyon to damp the line and thus more accurately tune the frequencies that exit the vent. A pure transmission line absorbs all the rearward radiation from a drive unit, B&W's Nautilus tube being a good example - but that requires an unfeasibly long damped tube behind the bass driver.

PMC operates its transmission line rather like a crossover, by using damping to filter out bass above 100Hz and making a quarter-wave length line whose output takes over from the bass unit below 40Hz. This approach simultaneously increases extension and substantialy reduces harmonic distortion in the bass.

The EB1 has a three-metre transmission line, which in the company of a 250mm chassis bass driver, makes for bass extension that's claimed to go all the way down to 19Hz (-6dB). The weird looking flat bass driver is made from a sandwich of carbon fibre outer skins with a Nomex honeycomb centre.

The end result being similar to Focal's glass/foam 'W' cones, both are light and stiff structures, designed to approach perfect pistonic action. This system has both pros and cons: on the plus side, the inherent strength means that power handling is unusually high, but against this, the extra weight that the longer than average motor assembly introduces inevitably reduces sensitivity.

This is combated by the use of an enormous magnet assembly that drives a 75mm edge wound voice coil - which is another pro style, power handling aid.

The 75mm midrange dome is a soft fabric unit that vents to a true transmission line behind it. This is shaped somewhat like a tapering flower pot with a rounded end, and is filled with wadding that gradually damps the rearward energy from the dome.

Bitumastic is used to damp this chamber and is also extensively used to nullify any activity in the 18mm MDF carcass. Although this doesn't seem particularly thick for a speaker of these proportions, when you consider that the transmission line provides very substantial bracing throughout the box, it seems a little more sensible.

Meaty, Beaty, Big and Bouncy isn't just a Who record from the 1960s anymore, it's now also a great way to describe the sound of this remarkably entertaining and capable loudspeaker, as that's the way it sounds if you play high energy material at high levels.

Conveniently, this is not the only way that you can use this loudspeaker; it is quite at home being used at more civilised levels with more refined music. But, to be frank it would be a crying shame if you owned a pair of EB1s and never let them rip.

Whether you like Beethoven, Led Zeppelin or Missy Elliott, the power of each is enhanced by a speaker that it capable of replaying them at something akin to realistic volume levels.

The ultimate limiting factor to how loud you can play without endangering passing family members or the environment will be the room and quite possibly the amplification.

Our sidebar offers recommendations on the power front but to get the room sorted discreetly hang underlay-backed curtains either side of the loudspeakers to cut out the first reflection and do the same behind the listening seat. You never know... the domestic manager might not notice the extra curtains.

Being a company with its fingers in both domestic and pro markets, PMC makes speakers that are designed to go loud without the distortion that usually accompanies volume, this is both good and bad. Good because the character of this speaker remains remarkably consistent at both high and low levels, and bad because it encourages anti-social behaviour, also known as fun, at least if it's your music!

This is not a speaker for hooligans alone however, it might encourage such behaviour but those of a more sensitive persuasion will find them highly rewarding at sensible levels. The transmission line factor brings an openness to the sound that makes the EB1 sound like a more sensitive loudspeaker than its specs suggest.

The 89dB sensitivity figure is at four ohms and equates to around 86dB at the usual eight ohm spec, but you could be fooled into thinking that this is a 90dB plus design by the way that the transmission line allows the sound to breathe.

Combining this openness with deep and powerful bass extension is 'a good thing' and something that few designers achieve. It doesn't sound as subjectively flat as something like a B&W 802D, but it is extremely revealing without being bright or forward.

It brings out detail across the board but seems to be particularly strong at the sort of frequencies occupied by percussion instruments such as cymbals, shakers and snare drums. The strength in this area is probably what gives the bass such a visceral quality.

Even with relatively bass light material, there is an underpinning to the sound that comes from the speaker revealing every last soupcon of bass energy. So when you have something where there's a proper bass instrument the lower registers are comprehensively rendered and in remarkably tuneful, even fast, fashion. With the right amplifier, the EB1 delivers that elusive quality of slam: the combination of bass weight and speed that allows bass instruments to be as vivid as their counterparts higher up the spectrum.

Another reason why the EB1 encourages one to play a little louder is that it is appealingly relaxed. Recordings such as Gillian Welch's Time (the Revelator) often seem to have a hard edge to them, which is simply not apparent here. If the speaker had limited resolve, you could understand it but that doesn't seem to be the case.

Instead, the EB1 just reproduces the material without adding the distortion that we had come to think was in the pits of the disc. The male voice on Fink's Biscuits for Breakfast is delivered with a its dusty glory that sounds extremely convincing. You can hear the limitations of the recording but you can also hear right into the mix because the two go hand in hand and make for a gripping musical experience.

The quality of bass that PMC claims its ATL design can achieve is made clear when you play something with a lot of bass energy, which is normally not that clean. Our example was Soweto's Where It's At by the Charlie Hunter Trio.

This has a voluptuous bass guitar sound that leaves the whole track sounding congested on many speakers. Here, the way that the EB1 breathes so well makes space for the bass to expand in the room and leaves plenty of room for the rest of the band to express itself.

A heavier and more expensive design like the B&W 802D delivers a slightly more resolute and realistic sound that is calmer still through the mid and top, thanks possibly to its incredibly inert cabinet. It's a factor that also creates greater precision in terms of imaging.

But it's less clear-cut in the nether regions, both speakers have similar extension and tunefulness but there is an ease to the PMC that is very convincing. Given the praise heaped on the B&W design, and the price differential between the two, this PMC is something really special.