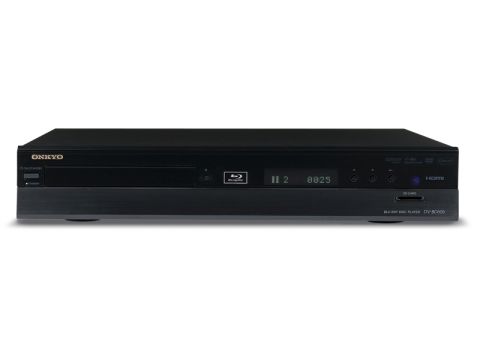 With almost identical innards to the Denon, the Onkyo is a bit of a bargain if you don't need BD-Live

A solid all-rounder with impressive Blu-ray and DVD playback, but it fails to justify its price tag

Aesthetically, the Onkyo is nothing new. It comes in black or silver with a brushed finish on the lower section of the fascia, but despite this the boxy, old-fashioned design still quickens the pulse.

Interestingly, like the Denon DVD1800BD, there's an SD card slot on the front which enables you to upload data for use with BonusView Blu-ray discs, as well as play back MP3s and JPEGs.

The button arrangement and info display on the front panel are also identical to the Denon. Hold on, so is the spec sheet…

If you hadn't already guessed, the Onkyo and Denon are in fact the same player in different clothes, with some differences: the Onkyo adds an optical digital audio output to the rear panel and lacks the Pure Direct mode found on the other brand that switches off the video circuitry to ensure a cleaner audio path.

But the biggest difference is the price, as you can pick up the Onkyo for around £100 cheaper if you dig around online.

Elsewhere on the Onkyo's rear panel is an HDMI v1.3 output, along with component, composite and stereo audio outputs, but sadly there are no multichannel analogue outs so you'll need an HDMI-equipped receiver if you want to enjoy HD audio formats.

Talking of which, the Onkyo can output any of these as a bitstream via HDMI, but like the Denon it can't decode them into PCM (you only get regular 5.1-channel sound).

The BD606 is only specified as Profile 1.1, which is a shame for the money, but otherwise it boasts a decent range of features. The deck outputs a 1080/24p signal, supports Deep Color, plays back DivX, MP3, and JPEG files from DVD or CD and also upscales DVDs to 1080p.

Onscreen presentation is very impressive, mostly because the menus aren't a carbon copy of Denon's (although both share the Custom and Quick menu idea). Onkyo's GUI is jazzy, colourful and laid out in a straightforward structure, plus in operation it's far from sluggish.

You can set the various audio modes quickly and easily and there's a fair few to choose from, too. Plus, the other settings are simple to understand.

The perfectly functional remote has a tidy button layout, but its build quality and looks aren't up to the same standard as the Denon's.

While it's not the slowest player, its 25sec bootup and full minute disc loading time aren't the fastest either. But once the disc is up and running, the picture quality is superb.

Of course, the first thing to jump out is the pin-sharp detail reproduction, which brings a striking clarity to the picture. Minute details are also impressively clear with no noise to get in the way.

This excellent detail handling is backed up by deep blacks, which make the image punchy and cinematic, as well as powerful colour reproduction and well-defined edges. And when set to 24p output and viewed on a compatible TV, the Onkyo makes motion look smooth and judder-free.

We also checked the Onkyo with some Blu-ray test patterns and it handled them with total aplomb, demonstrating that there's some very competent video processing on board.

That said, the edges of rotating diagonal lines aren't rendered as smoothly as they are on the Pioneer and Panasonic players, as they look a little more feathery.

Given the quality of the DVSP406 DVD player, it should come as no surprise that the BD606's DVD playback is fantastic. With the upscaling set to 1080p, there's no stepping on diagonal edges, detail is steady and sharp and colours look stunning. It also suppresses noise effectively, ensuring that your SD discs are in good hands.

Sonically, the deck is at its best feeding Dolby True HD and DTS HD Master Audio bitstreams to a compatible AV receiver, but we're also impressed by the player's analogue CD playback, which is smooth and well-balanced.

Overall, this is a solid deck that offers impressive picture quality, but the lack of BD-Live and DTS HD Master Audio support is a let down considering the relative expense.